Lorna Crozier in her garden near Victoria, BC / Photo by Toque & Canoe

Editor’s note: Award-winning poet Lorna Crozier, like so many Canadians, has been seeking extra comfort in her garden since mid-March of 2020. You can expect more “backyard stories” as we adjust our travel coverage to the times. Meanwhile, cheers to our travelling poet for another fine contribution to T&C’s pages.

My past Toque & Canoe stories always included a secondary character who spiced up my journeys — a man who, before I would let him fall asleep, composed haiku-like tweets we sent to the editor at day’s end.

He was a fog-driver in Newfoundland, a snake-seeker in Saskatchewan’s Grasslands National Park and a fearless grizzly spotter in the Great Bear Rainforest.

Afterwards, when we returned to our home on Vancouver Island, he would morph back into his more ordinary self, my husband, writer Patrick Lane.

Two things have utterly changed since these last assignments: Given the pandemic, I’m not travelling and when I do go on the road again, Patrick won’t be with me. He died on March 7, 2019.

These days, I come across him in many places, including in the books he wrote, but I’m closest to him in the place we spent so many hours together — our garden. 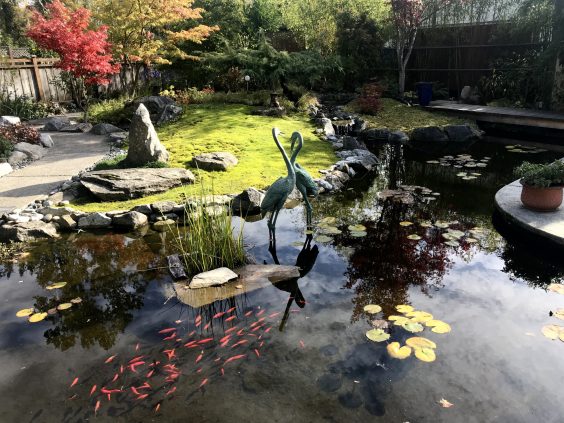 As Patrick once did, every morning coffee in hand, I step through the kitchen door and onto the deck that surrounds our backyard pond. It’s the focal point for my nature lover’s tour of the familiar and the strange. Sometimes there’s so much to see, I don’t move past it.

“Pond” seems too small a word for what this garden feature gives me. Maybe an adjective that piles on syllable after syllable better captures its huge significance — pondiferous.

This pondiferous thing contains multitudes. It blasts the senses. Even if it’s dark outside, you’d know the pond was there. The backyard is forever tuned to the splutter and gurgle of water running over stones at the waterfall. No matter what busy chatter occupies your head, your body leans toward it and listens.

In summer, after the sound of water greeting water, it’s the crazy abundance of lilies that grabs your attention. Rising above huge floating platters of leaves, they dab reds and yellows and corals across the surface.

Their scent mixes with the green pungency of algae and the faint whiff of goldfish that swirl in muscular ribbons through the sky’s reflection. 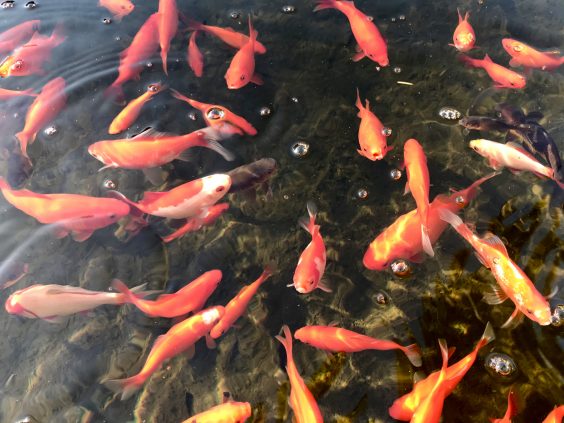 Every morning, I find something startling, something that reminds me to pay attention to the shifts in the seasons and the other shifts my flesh is heir to — the joys and sorrows that make up an earthly life.

Dozens of newly formed dragonflies flash their jewel-like bodies over the lily pads and drop to drink.

I find their casings, the thinnest of castoffs, clinging to the bulrushes. They are all that is left of the nymphs, the second step in this insect’s metamorphosis. Bug-like aquatic creatures, they live in this wingless ugly-duckling form for about four years.

Then, with more skill and grace than any man-made flying machine, the dragonflies they become hover, dive and zip, catching mosquitoes in mid-air. It’s no surprise they’re expert flyers. They’ve been practising 300 million years.

Swallows, too, skim the pond, beaks open for a quick slurp. And where the water stills and gathers in a shallow bowl on top of the waterfall, robins, finches and yellow warblers splash and bathe.

It’s autumn now, but I can still watch hummingbirds whip the pond water like wind-up toys designed by Fabergé. Anna’s hummingbirds, ruby-throated, emerald-backed, gather at my feeder at the edge of the pond and buzz-bomb one another.

They’re so quick, delicate and exotic, I question if they’re birds at all. 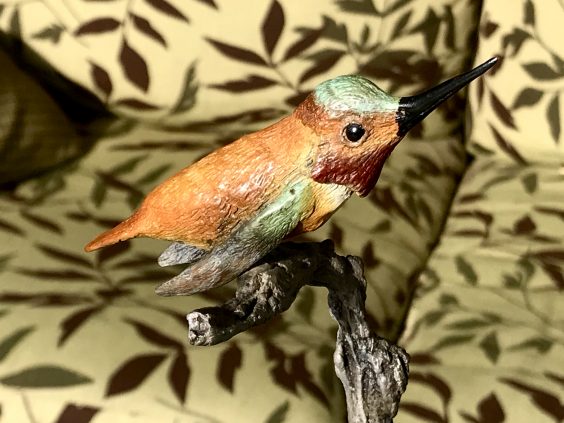 Are they insects dropping in to visit from an alien planet inhabited only by iridescent, improbably exquisite things?

Just as likely, they’re tropical blossoms broken from their stems and given flight by some quixotic God who wants to confuse us for her own pleasure.

Their nests, I know, are made of spider silk and lichen and other mysterious stuff. Two years ago, we found a tiny pouch, about the size of a walnut, slung low in the magnolia branches.

Patrick wrote, “Tonight I took my shorn hair and laid it on the arms of the pines. / In the mornings the hummingbirds will line their nests with me.” Every time I see a hummingbird in our yard, I wonder if it hatched in the warmth and softness Patrick left behind.

There’s an honesty to ponds. Without guile or coyness, they’ll openly reveal themselves to even a casual tourist, as long as she sits still and watches and listens.

But our pond, at least in winter, holds a secret.

When we moved into the house in December 14 years ago, we saw the sluggish flicker of goldfish suspended in the cold, viscous water, but nothing else. Then we found a note from the former owners on the kitchen counter. Two turtles, it informed us, were buried at the pond’s bottom. They’d been there since October.

In March of that first year and for every March since, one of us has run into the house and cried, “The turtles, the turtles are back,” as if they’ve come home from a long journey. Maybe they have. 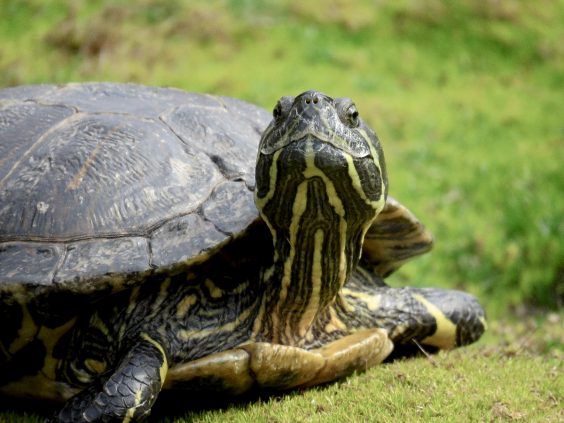 What they’ve been doing, we discovered, is brumating, a new word for us. It’s a reptilian form of hibernation. The turtles, which are red-eared sliders, slow down their metabolism come fall and sink into the mud until the water and the air warm up. In their sunken hideaway, they don’t need to eat.

More than the blurt of crocuses or the tight buds of tulips uncurling in the sun, the rising of the turtles announces the arrival of spring.

Earlier this year, I ran into the house to tell Patrick I’d seen a nose moving like a blunt periscope on the surface of the pond. He wasn’t there to hear the news. Nor will he be here to go with me when I can leave the yard and travel again.

In a poem inspired by our trip to The Great Bear Rainforest, Patrick wrote “I walked in the hollowed paw prints a grizzly bear left / ten thousand years ago this morning.”

Though his tracks are not visible, though they haven’t sunk deep into the earth like a grizzly’s, I know they’re there.

He has paced every corner of our yard. He has turned over every clod of earth and touched every stone. He has carried in his bloodstream the sound of water. The garden has held him as no other can. And it holds him still, for me.

This morning and every morning I walk in Patrick’s footsteps in this place he loved and nurtured, this sanctuary for what grows and changes and sometimes, in a heartbeat, disappears. 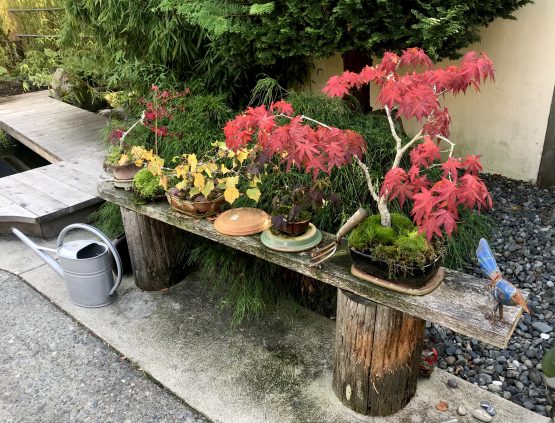 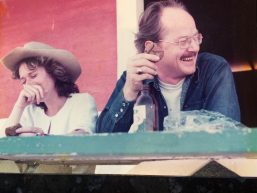