Two travellers with journalism backgrounds, Twyman (Toque) and Gray (Canoe) previously collaborated on stories for mainstream media about their adventures.

Driven by a desire to reinvigorate what coverage of Canada’s travel scene could look like, they created Toque & Canoe as their own storytelling vehicle and launched it on Canada Day in 2011.

A fresh and distinct voice in the world of Canadian travel media was born — a voice with a strong online presence on multiple platforms that connects with a growing and engaged audience.

— We were also, in 2012, nominated for a White Hat Award by Tourism Calgary.

— In 2013, Toque & Canoe won Online Magazine of the Year at the Western Magazine Awards in Vancouver.

— In 2014, contributors Lorna Crozier (a Governor General award-winning poet) and photographer Lori Andrews were listed as finalists in Tourism Saskatchewan’s Awards of Excellence for their collaboration Exploring Light’s Birthplace.

— In 2016, we were formally recognized for “making Canada better known to Canadians and the world” by the Royal Canadian Geographical Society at their College of Fellows annual dinner in Ottawa, Ontario.

— We were thrilled, in 2018, to hire ourselves out as editors for the visually stunning Churchill Wild: 25 years of Adventure on the Hudson Bay Coast — a publication that tells the story of one of Canada’s most remarkable travel companies, a company that wants to take you walking with polar bears.

— In 2018 and 2019, we were invited by the Nature Conservancy of Canada to present on their popular speaking tour Nature Talks (given that nature is often a theme in our travel coverage.) Thanks to regular contributor Don Enright, author of The gnarly North Coast Trail, and to our travelling poet Lorna Crozier, for being brilliant Toque & Canoe ambassadors in this influential speaking series.

— In 2019, The New York Times reached out to us as a reliable resource on travel culture in Canada, giving Toque & Canoe mention in their story about Canadian alternatives to U.S. hot spots.

— We also decided, in 2019, to start — with a distinctly Canadian spin, of course — cranking up our coverage of international destinations of interest to Canadians. Urban trekking in Taiwan and Meet Norway’s Bathing Angels are two examples of what T&C-style international coverage can look like.

— The world pandemic hit the travel industry like no other industry in March of 2020. Toque & Canoe addressed this new reality in our early 2021 post, which confirmed that we plan to paddle onwards in spite of the times.

— In July 2021, Toque & Canoe received our second mention in The New York Times for an interview about Canada’s borders opening up to our American neighbours.

— Given that we celebrated a decade of travel coverage on July 1, 2021, we were interviewed for a “Ten Years of Toque & Canoe” retrospective by CBC Radio’s Russell Bowers. We’re thankful for the exposure that CBC Radio has given us over the years.

Since our launch, Toque & Canoe has grown to include posts created by celebrated storytellers, photographers and distinguished Canadians —  including multiple award-winning travel writer and T&C Editor-at-large Margo Pfeiff, Vancouver’s John Lehmann, formerly of the Globe and Mail, Calgary-based wilderness guide and photographer poet Natalie Gillis and Astronaut Robert Thirsk, who paid a memorable visit to Tofino, B.C. for us a few years back.

So, do you have any interest in travelling to Atlantic Canada and “biting into 25,000 years of caught water and frozen light?” We invite you to give Lorna Crozier’s Gobsmacked in Newfoundland & Labrador a read.

Perhaps you’re keen to travel to La Belle Province to experience, like our Senior Editor Valerie Berenyi did, its Charming Charlevoix region. “Who needs France,” she asks, “when we have Quebec?” Fair question!

Or maybe you’re curious about the explosion of culture that is one of Western Canada’s largest Indigenous celebrations?

Then you definitely want to check out our photo essay Pow Wow Power: The Colours of Kamloopa by Leah Hennel. (Cheers to Indigenous Tourism BC for supporting this collaboration and to everyone who gave Hennel permission to take these exceptional photos.)

As we announced when we launched on July 1, 2011, we invite you to lace up your boots and grab the bug spray.

Together, we have so much to learn. 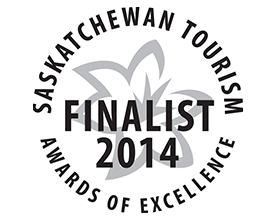