Nearly 400 million years ago, a meteorite slammed into this pocket of land 80 kilometres east of Quebec City. The celestial event created a huge crater ringed by mountains and hills pushed up by the impact.

Today, surrounding slopes are carpeted with forest and parkland, and dotted with farms and villages.

The municipalities of Baie-Saint-Paul and La Malbaie nestle in a plateau that forms half of the crater, with the mighty St. Lawrence River sweeping over the remainder of it.

This ecologically rich region — home to everything from tidal marshes to mountain tundra and bees to belugas — was designated a UNESCO World Biosphere Reserve in 1988.

Year round, the area draws nature-lovers, the sportif and foodies.

And, if you happen to be Canadian, Charlevoix has all of the charm of rural France, without the hassle of international travel. 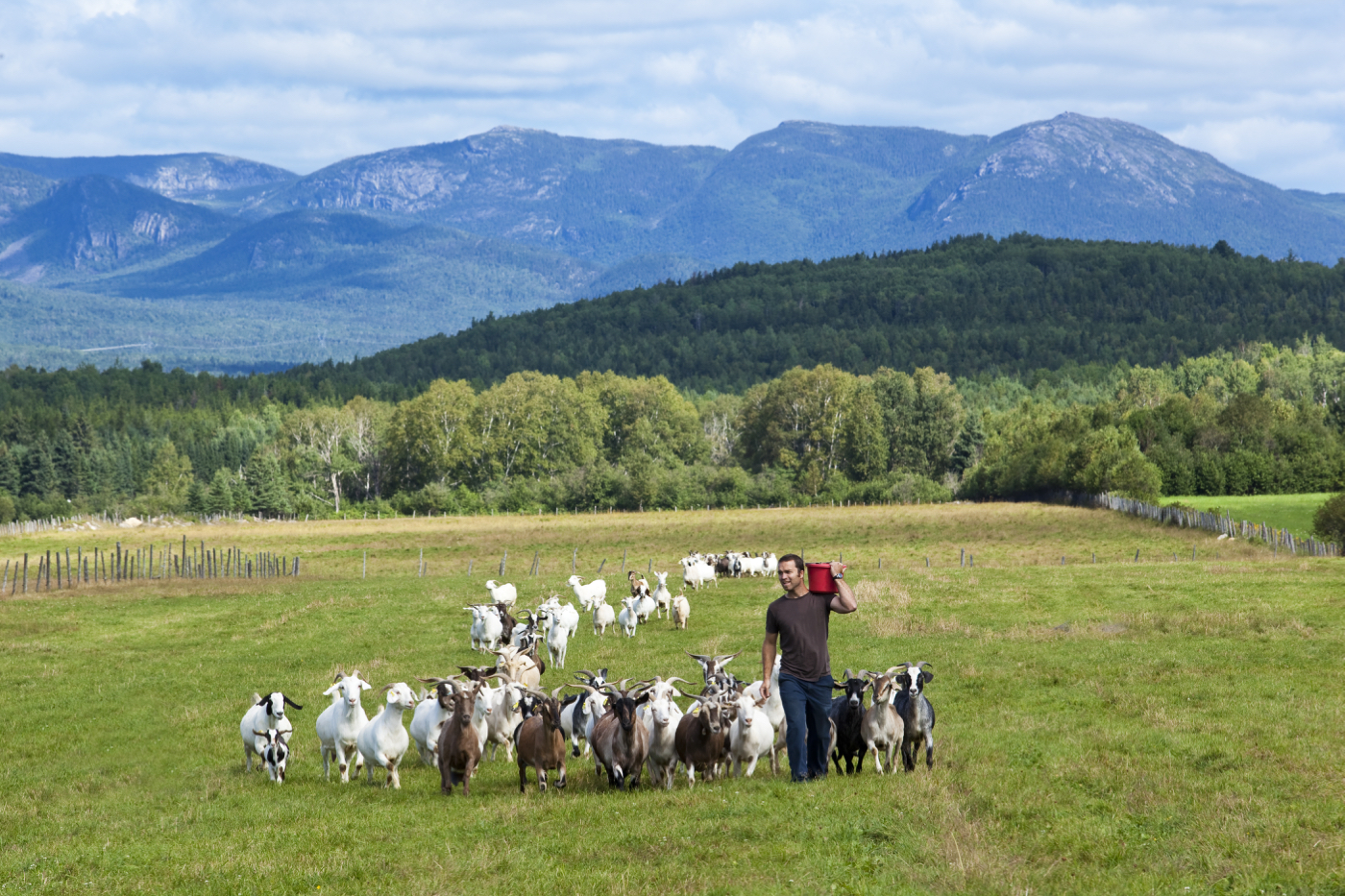 Relax with a rail cruise

To get to this unique place on a sunny summer long weekend, we catch the Train de Charlevoix from nearby Quebec City to La Malbaie; a 125-kilometre “rail cruise” that takes about four hours.

The privately owned railway line hugs the north shore of the St. Lawrence, giving us glimpses of seashore otherwise inaccessible by road.

Once we chug past Île d’ Orléans, where the river’s sweet water first meets the Atlantic’s saltchuck, the vast width of the St. Lawrence opens up.

The landscape becomes wilder and more rugged. Great blue herons fish in marshes and mud flats. Boats ply a shipping channel far in the distance, evidence of the more than 100 million tons of cargo that pass through the waterway every year.

The train is famous for serving nibbles and meals that represent the region’s terroir so we sample iced cider from La Cidrerie et Vergers Pedneault and velvety-rich, country-style pâté with morels and hazelnuts courtesy of Les Viandes Biologiques de Charlevoix.

As we travel, we take in vistas of adorable seaside villages and seabirds perched on boulders (glacial erratics deposited by the melting Ice Age) left high and dry by the departed tide.

It’s all very serene and as the train clip-clops along, we’re lulled into a contemplative state. Or, maybe it’s the cider. 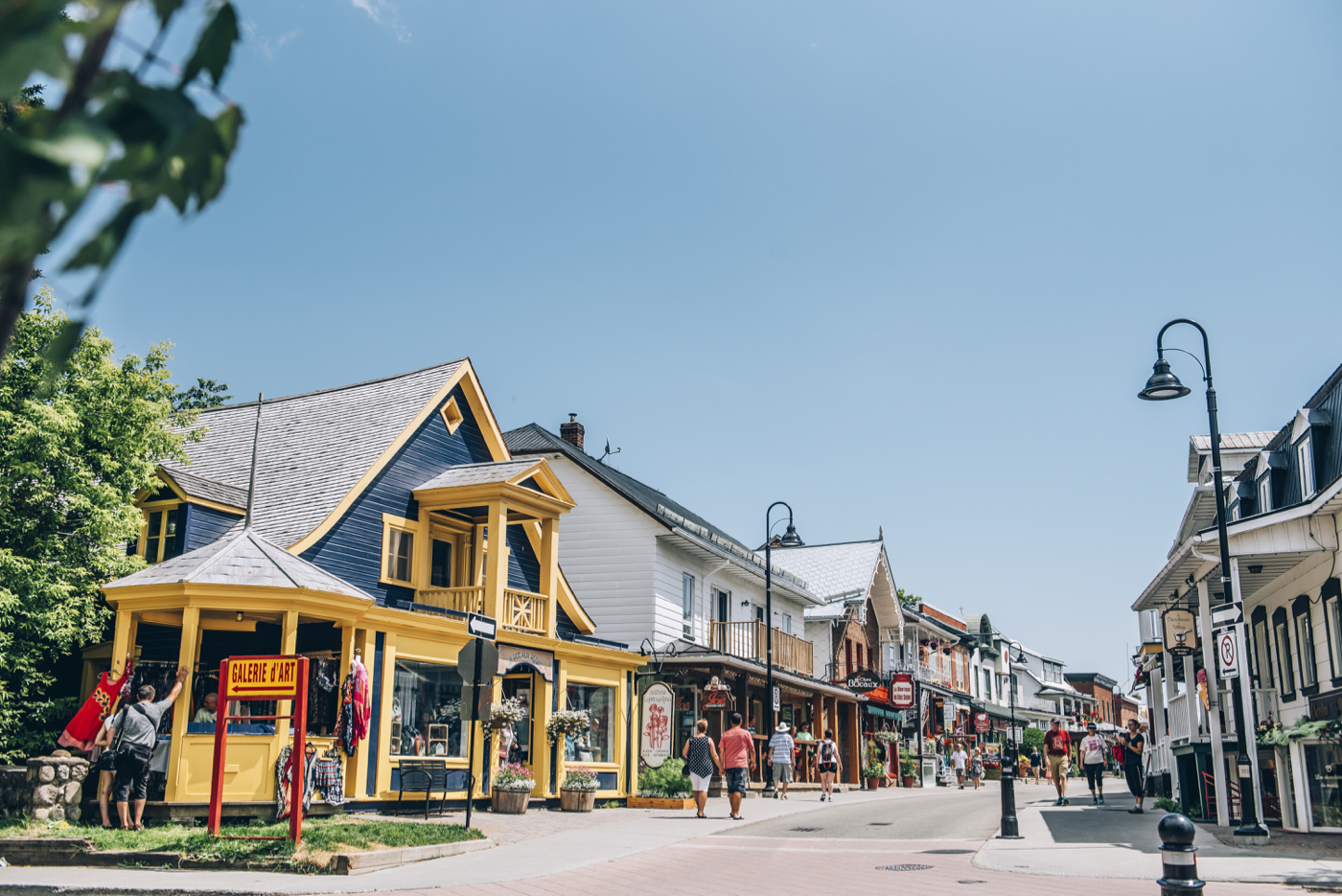 A stay at Chez Truchon Auberge-Bistro in La Malbaie, the playground of rich Americans from the 1800s to the 1920s, sets the tone for the next few days: coddling leavened with adventure.

The turn-of-the-last-century inn is a happy mix of old and new.

Its eight rooms offer up every modern convenience and chef/co-owner Dominic Truchon, a native of La Malbaie, puts a contemporary spin on the region’s bounty, which is served in a traditionally elegant dining room. (British politician Theresa May and other dignitaries ate here during the G7 Charlevoix Summit in 2018.)

Our five-course dinner features lamb raised in the Charlevoix mountains, which is plated with impeccably fresh local vegetables. Dessert is a combination of the region’s legendary Migneron cheese, with mixed field berries, grape compote and slices of toasted baguette.

The following morning, a breakfast of yogurt, granola and fruit at Chez Truchon fuels a whale-watching excursion to the Saguenay-St. Lawrence Marine Park aboard one of Croisières AML‘s zodiacs.

We launch near the village of Tadoussac where the Saguenay River flows into the St. Lawrence.

Here, in the great upwelling of nutrient-rich currents, we see pods of sleek minke whales, bear-sized grey seals and, far away, mother beluga whales and their babies. These delightful white whales are endangered, susceptible to marine traffic and pollution, so they are given a wide berth.

And then, ohh, we spot a humpback and her calf! I am moved to tears by their precious bond, the little one diving alongside its mother, again and again, in the sparkling blue water.

A country hotel and a kayaking expedition

We decamp to the pretty little city of Baie-Saint-Paul, chockablock with art galleries, shops, restaurants and cafés.

A short stroll from the town centre is Hôtel & Spa Le Germain Charlevoix, with a Train du Charlevoix station located right at the hotel’s main building.

The spa-resort is located on farmland, its architecture echoing buildings of days gone by.

Sheep and cattle still graze the hotel’s pasture, and it’s a singular experience to walk over in a cosy robe and commune with the animals after taking the waters at Spa Nordique’s thermal pools.

The hotel’s three dining options are provisioned by its own vegetable gardens and local producers.

Before we retire for the night, a selection of five of the region’s cheeses leaves us a bit giddy. Or perhaps it’s the champagne, produced in nearby Sherbrooke. 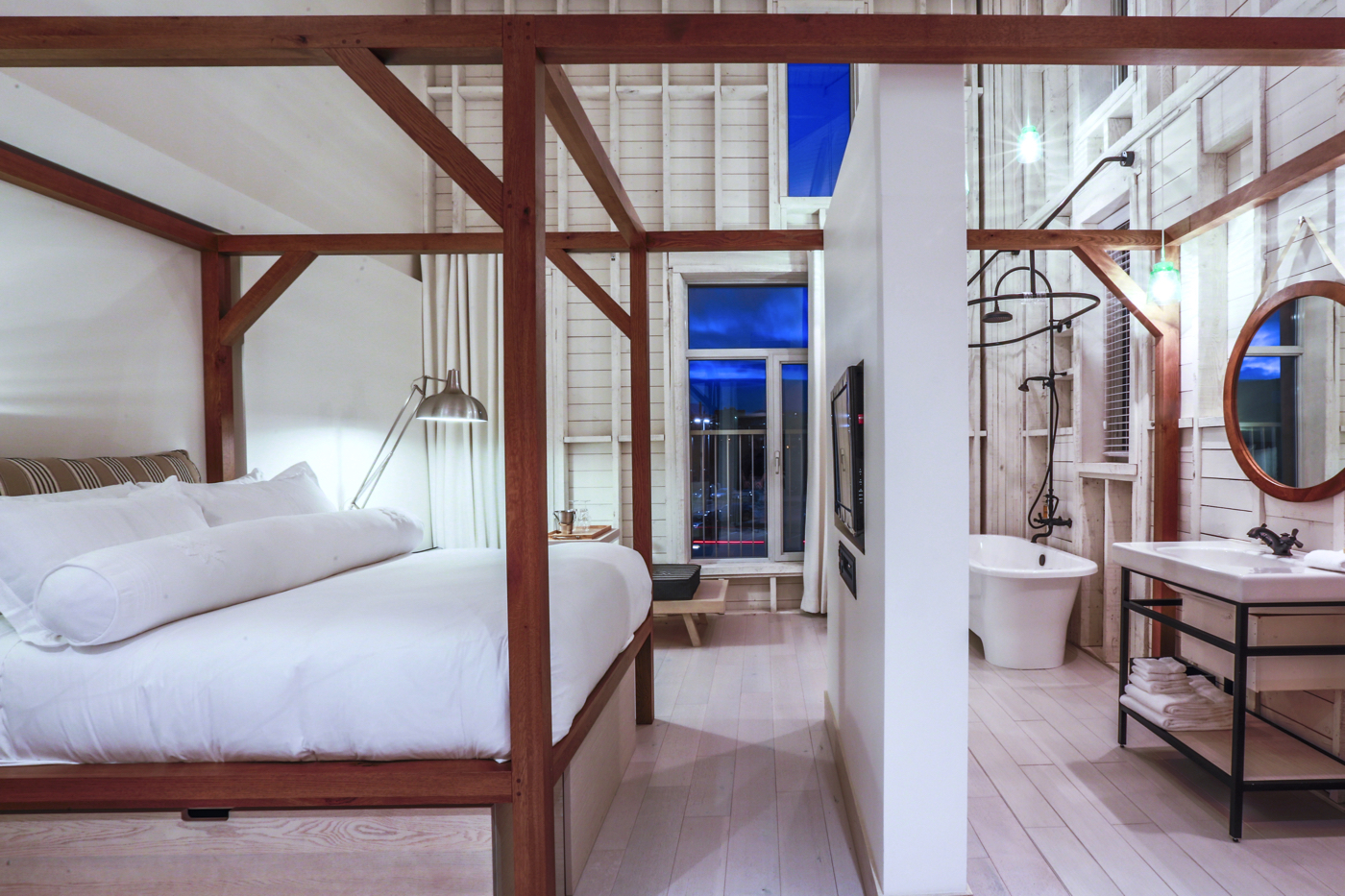 The following morning is devoted to a half-day kayaking trip, another chance to explore the St. Lawrence, this time under our own steam.

The river is like glass when we start paddling from the Baie-Saint-Paul wharf.

At first, our guide from Katabatik-Aventure Dans Charlevoix leads our small group along the coastline to Cap-aux-Corbeaux where we see the bright yellow Charlevoix train go tootling by.

Then, given the calm, windless conditions and the high tide, we decide to make a crossing to Isle-aux-Coudres (the island of hazelnuts).

We cross a shipping channel (no boats in sight!), circle a lighthouse thick with cormorants and paddle hard back to Baie-Saint-Paul — torching any excess calories from the previous night’s dinner. 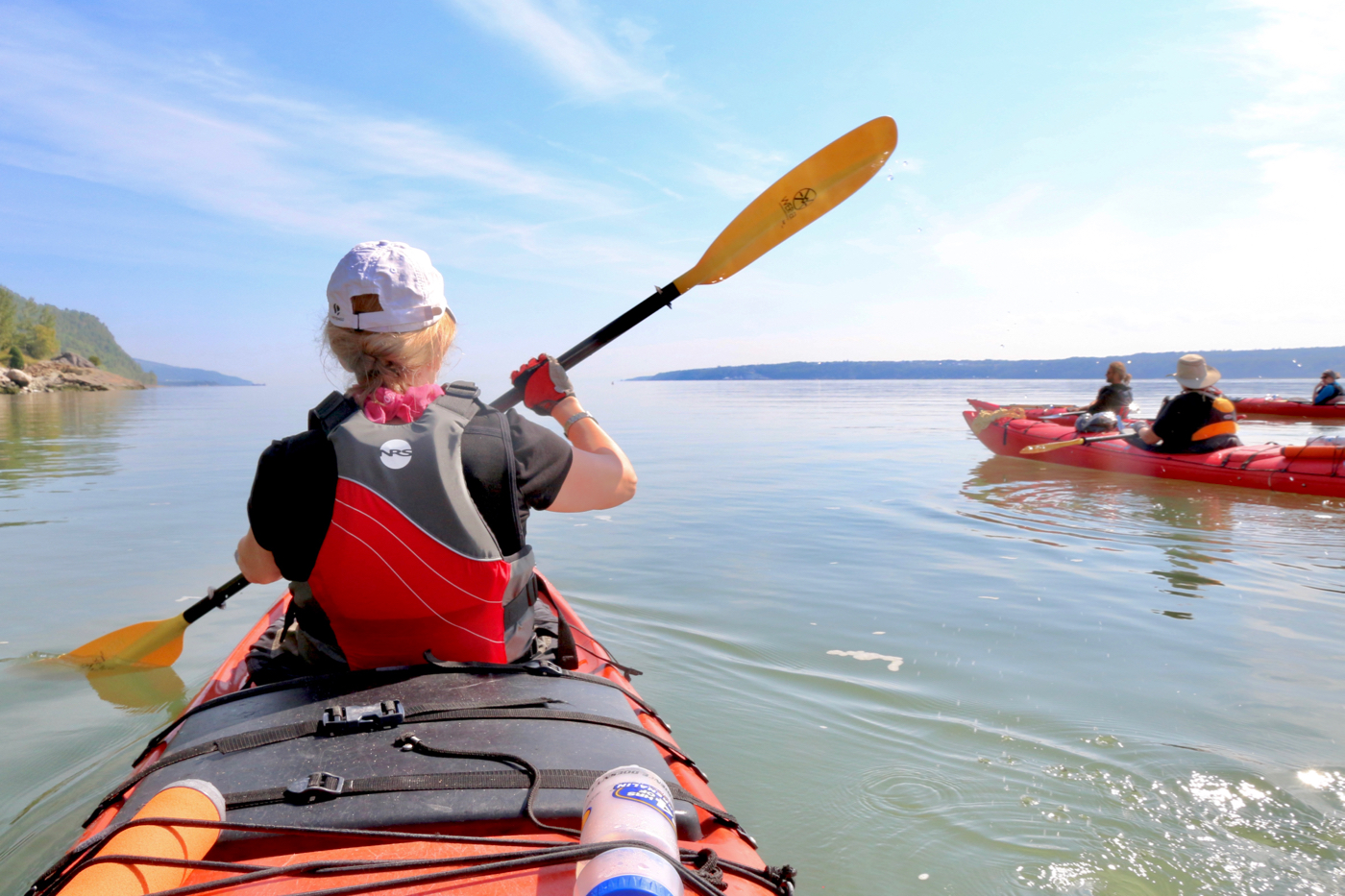 To taste a small snippet of the region’s agrotourism, we hop on e-bikes rented from Charlevoix Éco-Mobilité, a bicycle tour service headquartered at Hôtel & Spa Le Germain Charlevoix, and peddle to Azulée.

From about 2,000 hardy plants, she produces culinary lavender — teas, salts and the dried herb itself — plus artisanal items such as essential oil, sheep’s-milk soap and soy candles.

After touring Vidricaire’s operation, we sample some of her lavender sablé cookies, charmed by her warm personality and beautiful surroundings.

Later, by car, we visit Miel des Grands-Jardins, an artisan “honey house” near La Malbaie. Bees contribute to about 40 per cent of what people eat, so they’re an essential part of the Charlevoix’s biosphere, says owner and bee-lover Jean-Marc Lavoie.

To learn more about these fascinating creatures, we pull on bee suits and take a guided tour through Lavoie’s hives. We taste fresh honey, rich and caramelly from the fireweed and goldenrod his bees have been feasting on.

Lavoie’s bees make 4,000 kilos of honey every year, which he sells online and at his farm stand.

Our last stop pays homage to Famille Migneron de Charlevoix, founded in 1994 by Maurice Dufour, a cheesemaker who trained in France and makes the company’s cheeses from its own sheep’s milk and Baie-Saint-Paul cow’s milk.

Dufour’s daughter Madeleine, 24, is a passionate advocate for the family business and the region’s gastronomy.

She tells us about growing the business into wine, meat and wool production. And she shows us heavily pregnant ewes reclining in tidy barns, as well as a new distillery that turns leftover whey into “milk vodka” and gin.

She also provides a delicious tasting of six sublime cheeses, then seats us on the patio of Faux Bergers, the onsite restaurant, where we’re offered a luscious glass of Charlevoyou blanc — produced by the Dufour Family’s vineyard.

Lunch, prepared by a young chef who has emigrated from France, starts with roasted celeriac with dill and smoked salmon, moves to lamb with fresh fava beans and tomatoes, and finishes with velvety, soft-serve ewe’s milk ice cream.

As we gaze at picture-perfect barns and meadows with grazing sheep, we find ourselves wondering: who needs France when all of this is right here in Canada? Then again, it could be the wine.

Editor’s note: Our writer was hosted by Tourisme Quebec and Tourisme Charlevoix. Her story was not reviewed or edited before publication by our partners in tourism.