One quarter Inuvialuit, one quarter Gwich’in and half Ontarian, 33-year-old Kylik Kisoun Taylor inhabits and represents the best of Northern and Southern Canadian worlds.

Ever since he returned to his mother’s hometown of Inuvik, NWT as a 16-year-old boy, Taylor has wanted to share the unique, winter-rich region in a global way.

Today, he does this with passion and enthusiasm through his company Tundra North Tours, which offers travellers rare personal experiences amid a traditional way of life.

“It’s important to my soul to give guests a transformational experience,” he says. “I had one when I first came to the North, and I need to share it. Life up here is beautiful and sustainable. It makes people feel one with nature, a part of something bigger than themselves. It’s made me who I am today.”

Taylor is a savvy and insightful guide who understands what it takes to make visitors comfortable and have fun, while still challenging them in the context of an impressive but extreme environment.

I’ve been working for decades as a journalist and photographer in Canada’s North, and my four-day guided expedition with Tundra North Tours is one of the most intimate “out on the land” immersions I’ve ever had.

Here’s a sampling, in words and photos, of what I experienced during this memorable trip to Canada’s Northwest Territories. 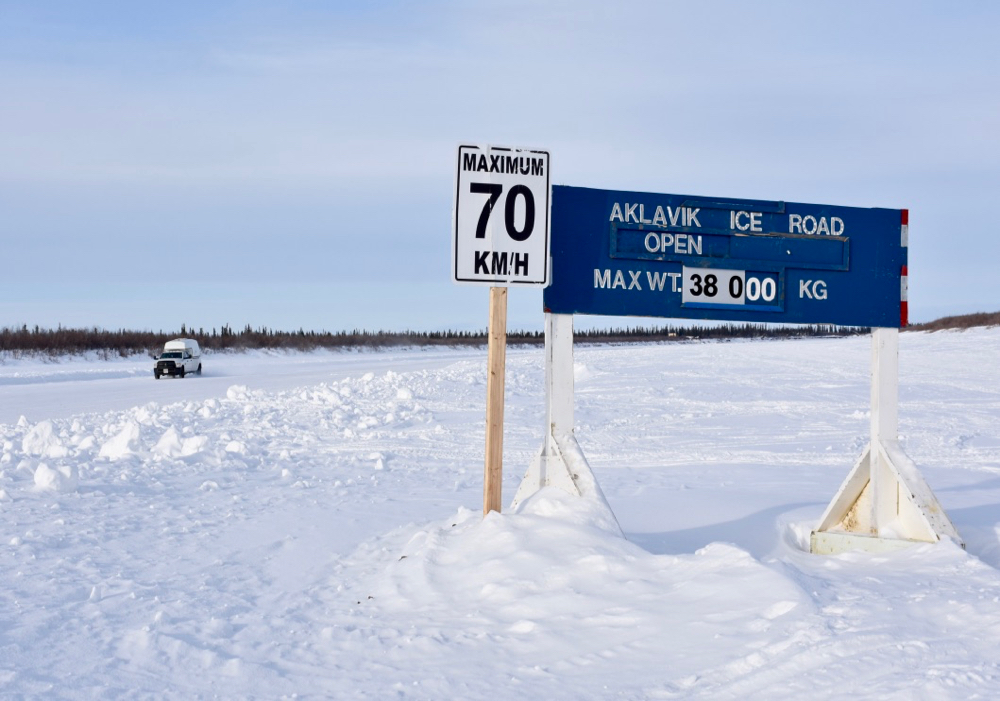 The only ice road out of Inuvik winds 117 kilometres along the frozen East Branch of the Mackenzie River to the Inuvialuit (Western Canadian Inuit) community of Aklavik between December and May. Driving the smooth, groomed and graded ice road, we pass alongside barges, boats and a coast guard vessel frozen into the river. 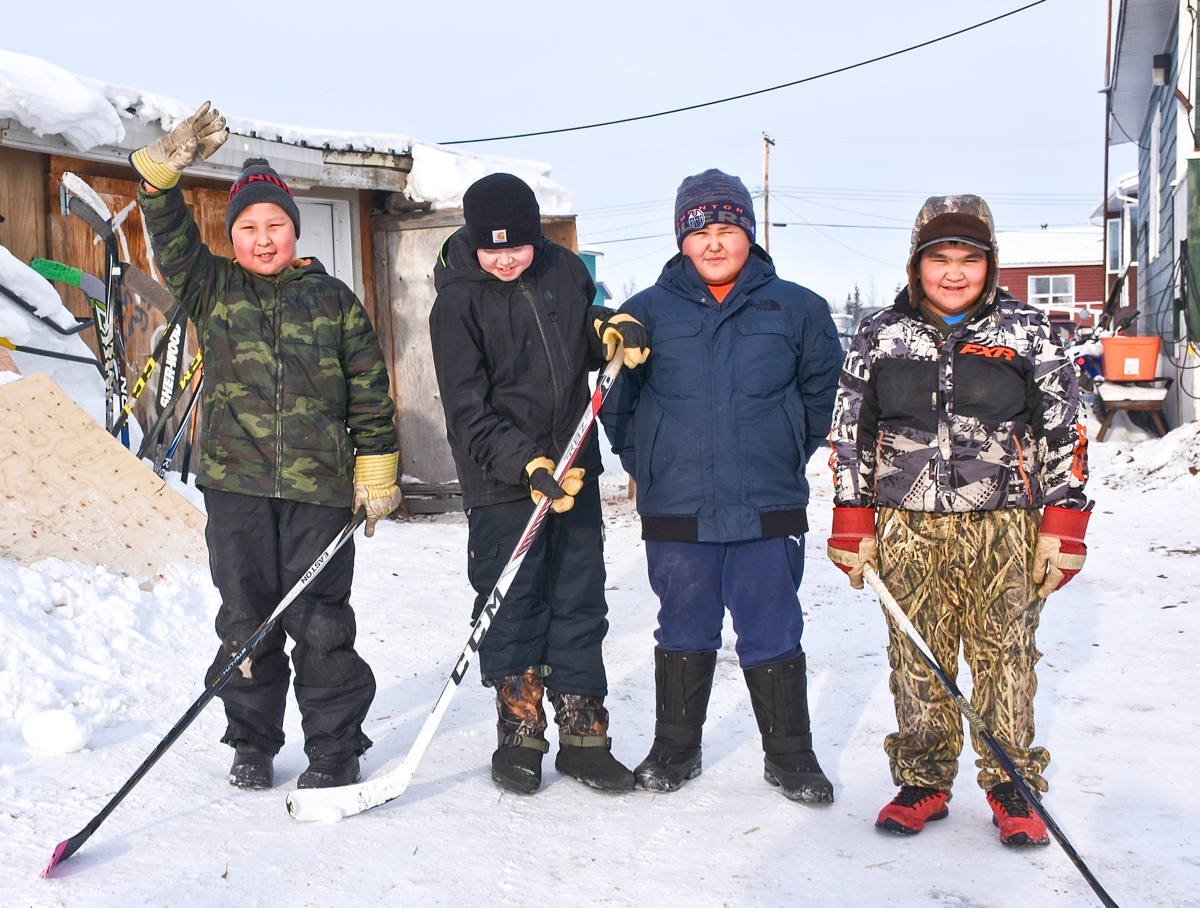 Four boys playing hockey in the fresh -23 C air on the frozen streets of Aklavik (pop: 800) eagerly line up for a photo without being asked. Folks are very friendly and welcoming in Northern towns where residents live a largely modern life, although many continue with traditional subsistence hunting, fishing and beluga whaling. 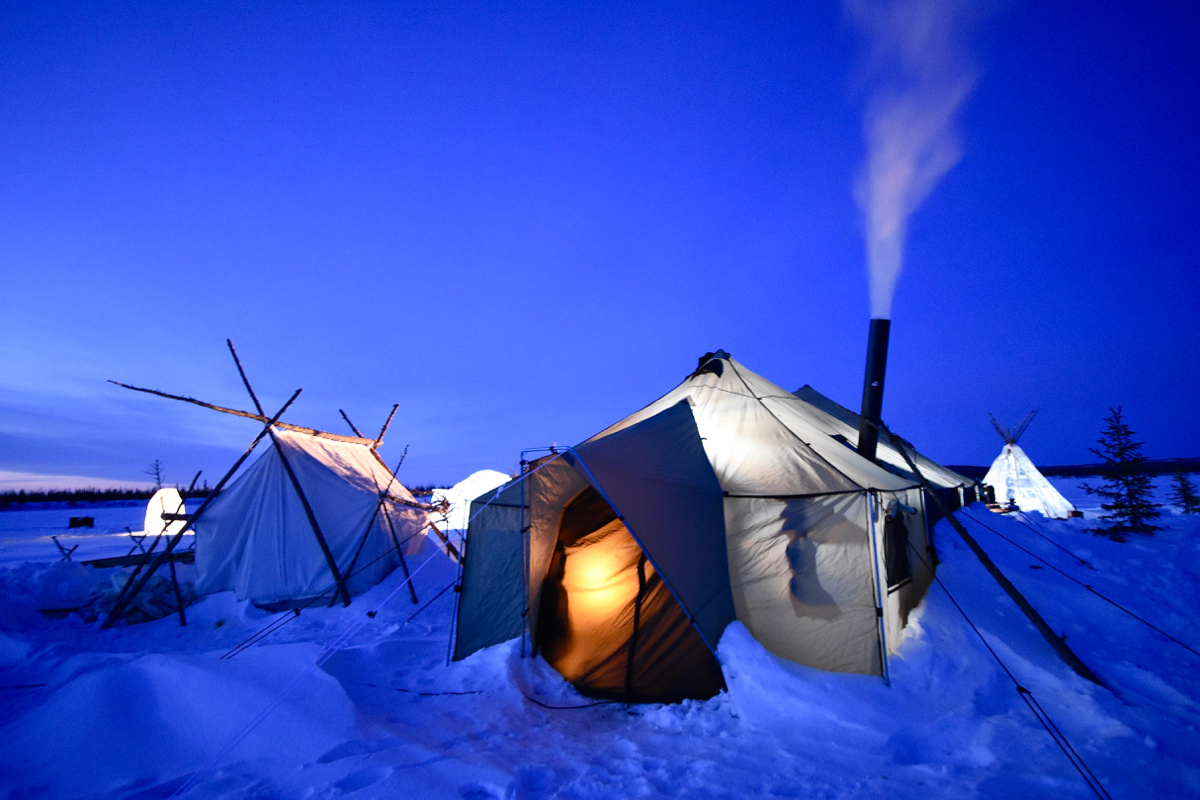 Set on a frozen lake 16 kilometres from Inuvik, Tundra North’s Aurora Igloo Village is our base camp. Its epicentre is a cosy, woodstove-heated communal tent for meals and socializing where Judy Francey, a former teacher from Inuvik and now an Inuvialuit cook, serves traditional fish meals and rabbit soup. One unforgettable night we eat in an igloo and sample delicious reindeer, moose and beluga jerky, whale blubber, smooth and creamy smoked whitefish and quak, Inuit-style sushi made from raw, frozen Arctic char. 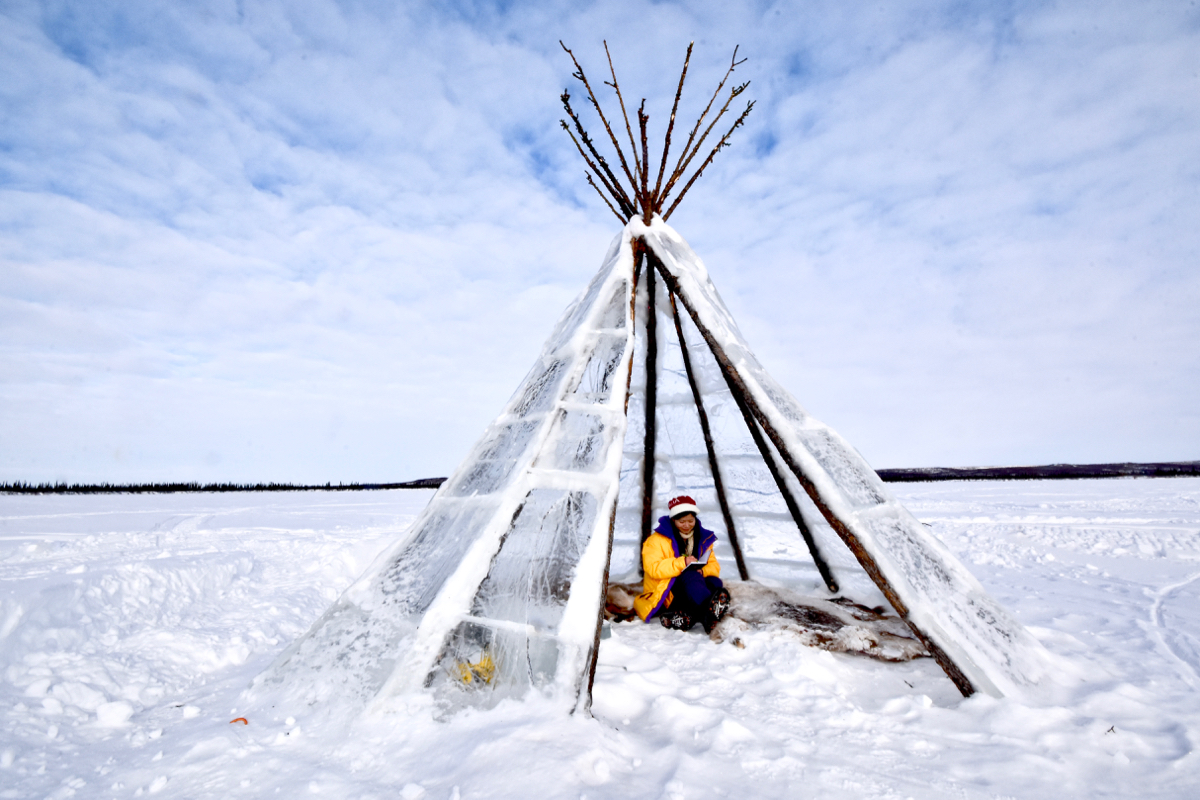 Tundra North Tour’s Aurora Igloo Village features a chic clear-ice igloo, an ice teepee (in honour of the local Gwich’in people) and an ice wall around a fire pit, all wonderful places to escape the wind and hang out in sunny weather or in the evening. 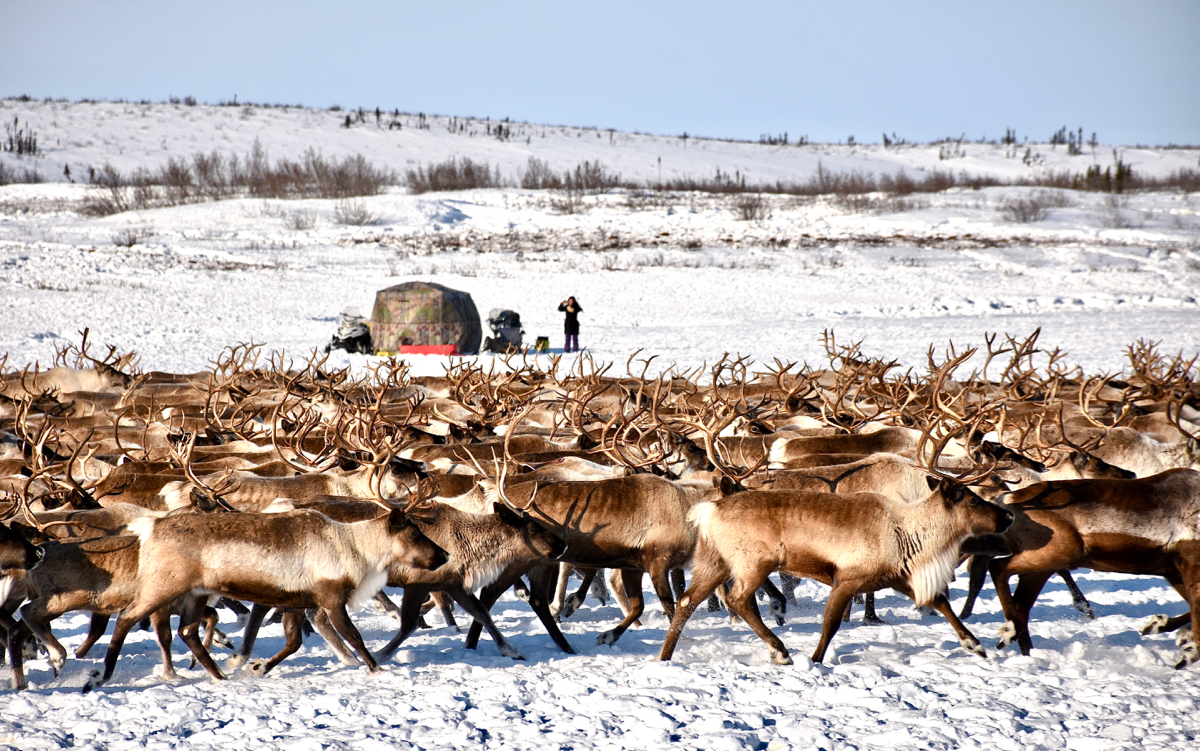 Located between Taylor’s Aurora Igloo Village and Tuktoyaktuk, Canada’s only herd of reindeer — a vast tangle of dark brown antlers against a bright blue sky — is silent except for gently clicking hooves, soft grunting and a muffled crunching of snow. When the herd, cousins to our caribou and imported from northern Russia via Alaska in the 1930s, is on the move across the tundra, it’s thrilling to behold. Pounding hooves send up clouds of powdery snow, and you feel a low rumbling in your chest. 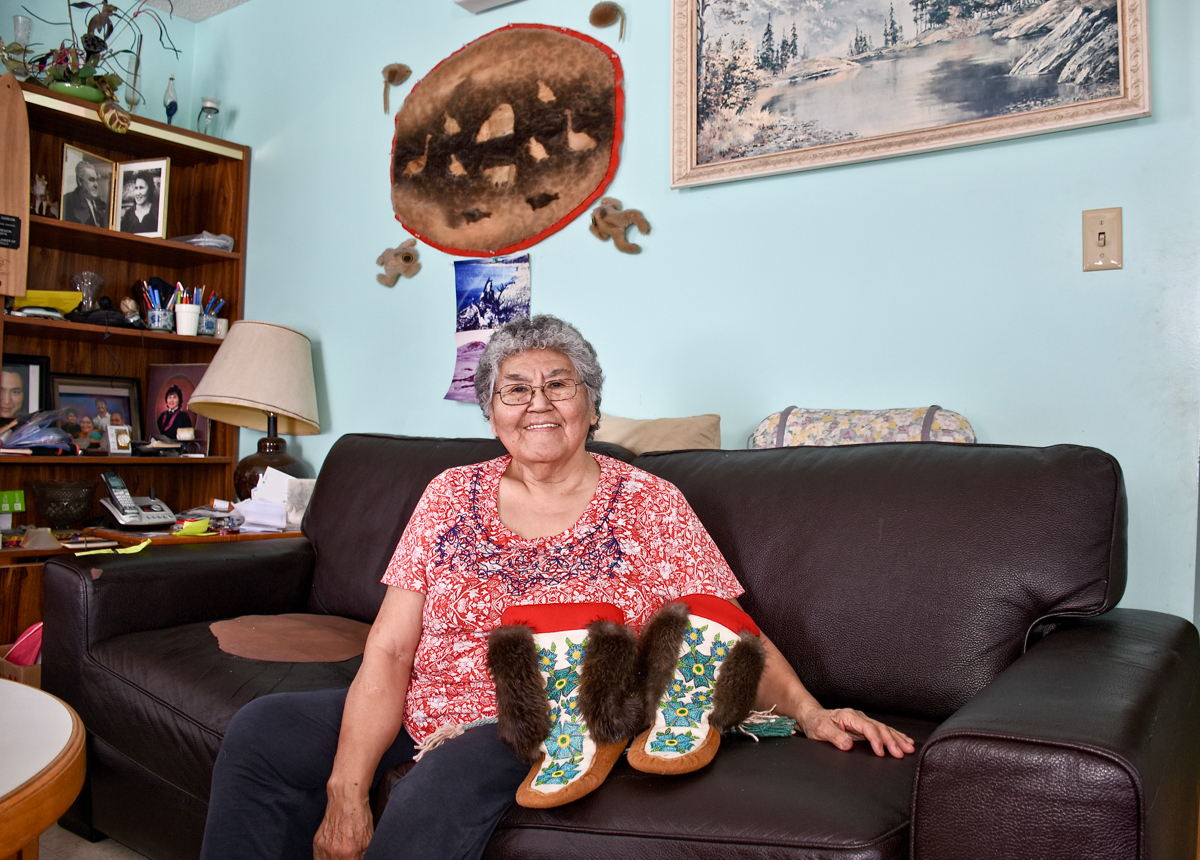 A traditional artist living in Aklavik, Annie C. Gordon runs a small craft operation from her home selling her own handmade items like beaded mukluk slippers and parkas. Cheerful and happy to chat with visitors, she serves us hot, sweet tea and warm baking powder biscuits with jam, a typical Inuvialuit welcoming gesture. 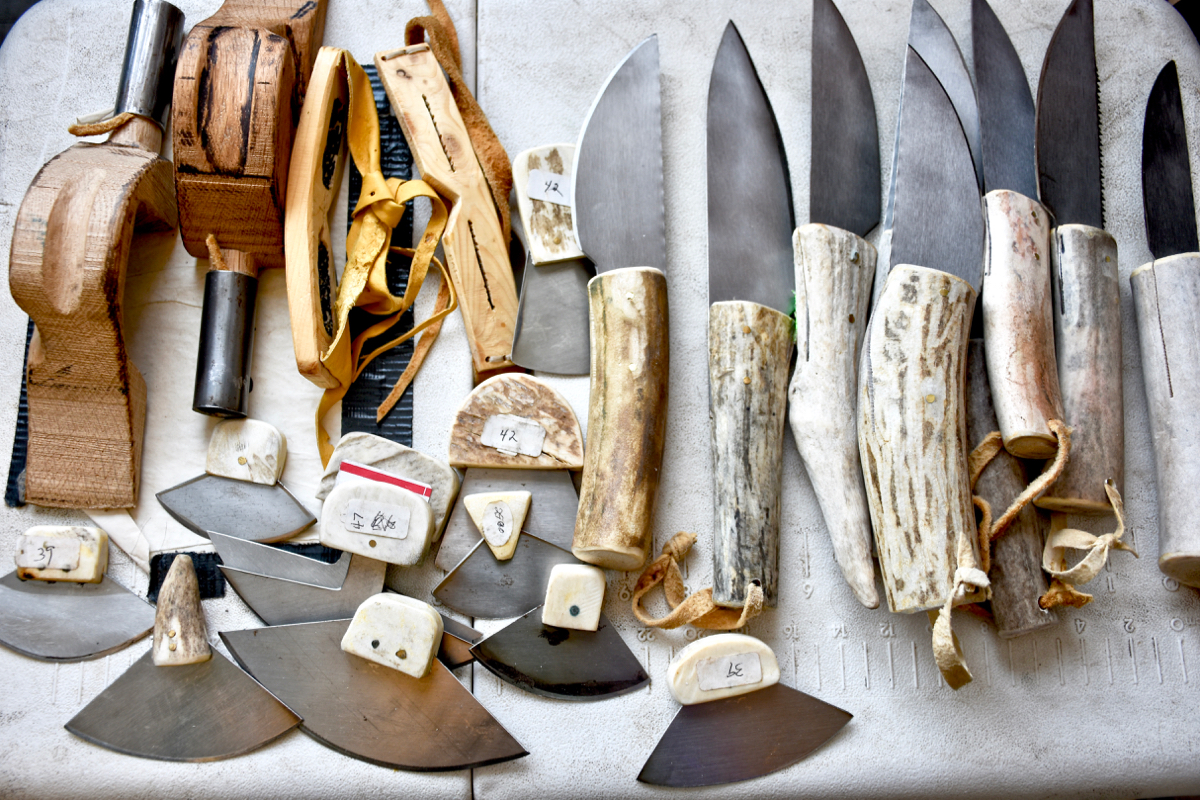 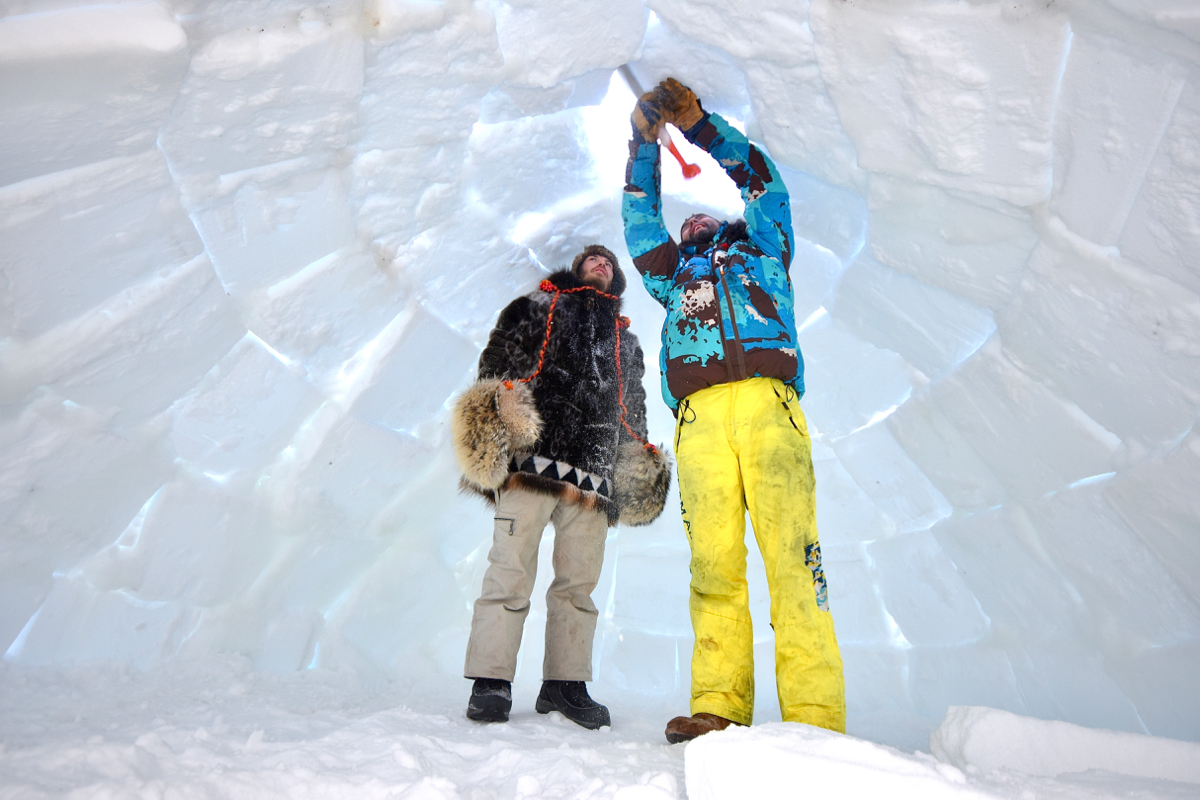 Taylor and his highly experienced guide and friend Noel Cockney, a native of Tuktoyaktuk, finish up an eight-person igloo, traditionally made out of snow blocks. Other guests (from around the world) and I spend a night sleeping in igloos on heated mattresses atop reindeer skins, comfortable and warm until Taylor wakes us at midnight and we scramble outside to watch green Northern Lights swirling across the Arctic sky. We stay outside as long as we can until, cold and elated, we crawl back into our igloo and snuggle up in thick, down sleeping bags.

Note from publisher: Our writer was a guest of Tundra North Tours. Our partners in tourism did not review or edit this story before publication. (Tundra North’s four-day Canadian Arctic Reindeer Signature Package is available mid-February through mid-April. For more on the operation, check out Heart of the Arctic, a stunning, short video which won silver at the Cannes Corporate Media & TV Awards in 2017.)