I’m sitting in a power boat off the coast of Victoria, B.C., scanning the salty waters for a woman in a red canoe.

She is filmmaker, photographer and artist Dianne Whelan and she is about to wrap up the journey of her life.

Launched in 2015, the adventure will make Whelan the first person to hike, bike, snowshoe, portage and paddle the Trans Canada Trail which, at 28,000 kilometres, is the longest network of multi-use recreational trails, including green paths, roads and waterways, in the world. 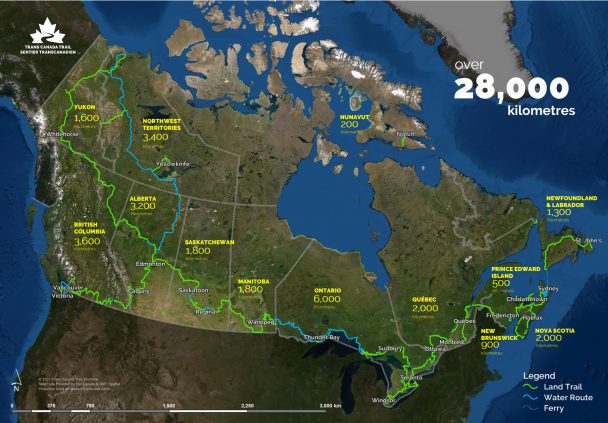 It’s a privilege to be cruising with Whelan’s longtime friends Dave and Kathy McNamara, who have volunteered to shepherd her as she crosses the Salish Sea between mainland Canada and Vancouver Island.

It’s even more of a privilege to climb into Whelan’s now-famous red canoe once we spot her (exciting!) and interview her for this story as we paddle together. 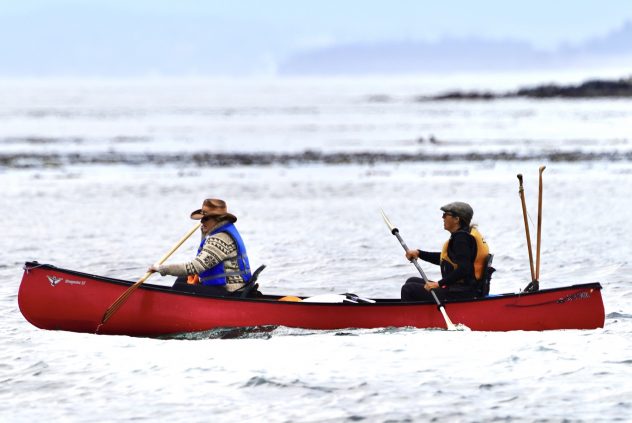 I ask Whelan, who prefers a kayak paddle to a traditional canoe paddle because it’s easier on her back, how she’s feeling now that she’s facing the final stretch of her historic pilgrimage.

“My heart is soft,” she replies thoughtfully. “I have a lot of people to thank for helping me get this far.”

The 56-year-old adventurer strikes me as unusually calm for someone who’s endured extreme physical and mental hardships in all kinds of weather and circumstances over the past six years.

It’s been an epic undertaking — from pushing her bike through a torrential rain and windstorm in Nova Scotia (“with branches snapping off trees all around me”) to portaging her canoe through deep snow along Ontario’s Path of the Paddle (“not my brightest moment”) to encountering a huge black bear that bluff-charged her while she was hiking in B.C.’s interior (“I’m grateful the bear let me live.”) 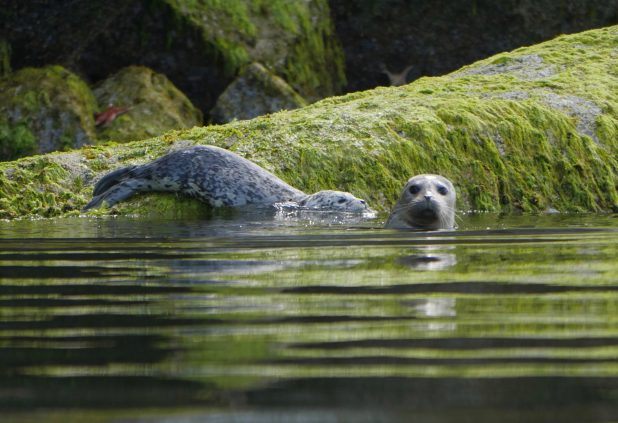 We paddle past curious, black-eyed seals and I find myself recalling what Whelan told me when I interviewed her for an assignment two years ago.

When asked what prompted her journey, she said there were a number of factors, including her struggle to celebrate being Canadian given the country’s shameful treatment of Indigenous people.

Concerns about climate change and news of mass ecological destruction around the planet also weighed heavily on her mind. She confessed she had a “crisis of faith” when she read an article about a whale that was found dead on a beach with car parts in its stomach.

“It’s a scary place when the world stops making sense to you,” she told me. “Travelling along the Trans Canada Trail, this umbilical cord through land and water that connects us all in spite of our differences, seemed like a way forward.” 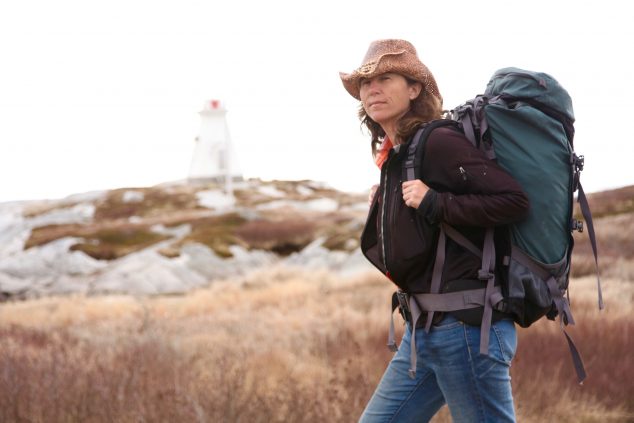 Her quest, she explained at the time, was very much about connecting with Indigenous people and paying respect to the land and water along the way.

“I’m looking for lost wisdom,” she said, noting that she identifies as a Canadian with European settler ancestry. “I’m travelling not as an athlete, but as someone who wants to learn, listen and witness. I’m meeting elders, healers and grandmothers along the way and I’m having profound exchanges. I can tell you now that the despair I had in my heart when I started this journey is disappearing.”

Whelan often refers to the kindness of strangers she’s met along the way.

She mentions the late Mi’kmaq Grand Chief Ben Sillyboy who, on Cape Breton Island, gifted her a feather and whose daughters named her canoe “Kwimu” (which means loon).

Then there was Dianne Ottereyes Reid in Quebec, who prepared Whelan a delicious Cree meal featuring fire-roasted goose, wild rice and berries.

And she appreciated the Dené hunters who generously provisioned her with fresh moose meat when she was travelling to Tuktoyaktuk on the Arctic Ocean, the most northern point of the Trans Canada Trail.

We paddle onwards. Up above, a handful of seagulls float on the wind, their breathless cries filling the sky. I find myself wondering if the despair she referred to when we first spoke has disappeared completely, and if the trip has changed her.

“Honestly, it’s too soon to say,” says Whelan, who plans to produce a book about her adventure called 500 Days in the Wild, as well as a feature film of the same name. “I’m approaching this project like it’s my Joni Mitchell Blue album. I hope to tell a story that reflects the zeitgeist of our time.”

Tonight, Whelan will camp on a nearby island. Then tomorrow morning, with friends and family poised to greet her, she will paddle to Victoria, pull her canoe ashore and walk the final distance to Mile 0 of the Trans Canada Trail. 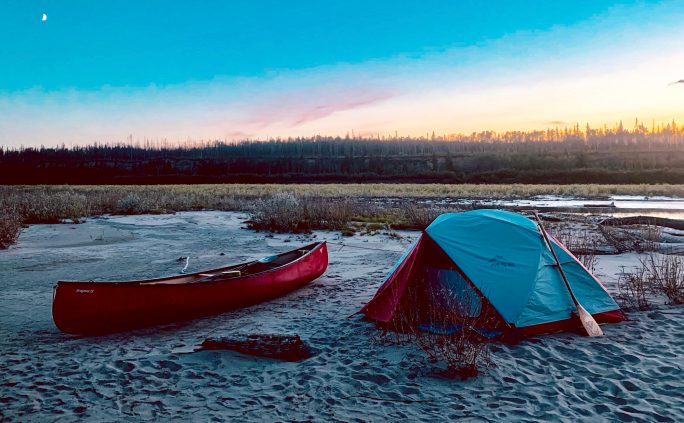 When Whelan launched her expedition in Newfoundland six years ago, she’d never actually canoe camped before. But she was no stranger to the outdoors.

As a documentary filmmaker, she’d travelled to the Arctic and to Mount Everest. Even as a baby, she found solace outside. “If I was crying, my mom would bundle me up and take me outdoors. Nature is a fundamental part of my spirit,” she says.

Whelan’s mother taught her as a young girl how to make a fire in the snow with birch bark. “I carried a leather pouch full of birch bark with me everywhere I went on this trip,” she says. “Because of the bark’s natural oils, it lights even when it’s wet.”

One of her adventure’s most memorable moments involved a dark night around a campfire when she and her partner Louisa Robinson, who’d joined her for a leg of the adventure, were travelling north along the Mackenzie River.

“Suddenly, the entire sky came alive with shimmering curtains of glowing greens and then purples,” recalls Whelan, who had never seen the aurora borealis so mesmerizing. “The light was reflected in the water all around us. We felt like we were literally floating in space. It was so beautiful, we just fell silent.”

Born in Ontario and raised in British Columbia, with summers spent visiting her mom’s family in New Brunswick, the McGill University graduate in political philosophy (“I’ve always loved the ‘idea’ of ideas”) has roots on Canada’s East Coast that can be traced to the 1600s. Her father’s family is from Newfoundland.

When I reach out to Whelan’s younger sister Nicole to ask what it’s like being the only sibling of the incomparable Dianne Whelan, she recalls that when the girls were small, she wanted to play with Barbie dolls but “Dee” wanted to collect frogs.

“I’d go with her on her escapades, but only if she promised to play Barbies with me after. Dee always kept her promise, but it had to be ‘Adventure Barbie,’ with Barbies doing things like jumping out of planes,” Nicole says with a laugh.

“She was my best friend growing up and she still is now. She’s intelligent and compassionate and she leads a truly purposeful life.” 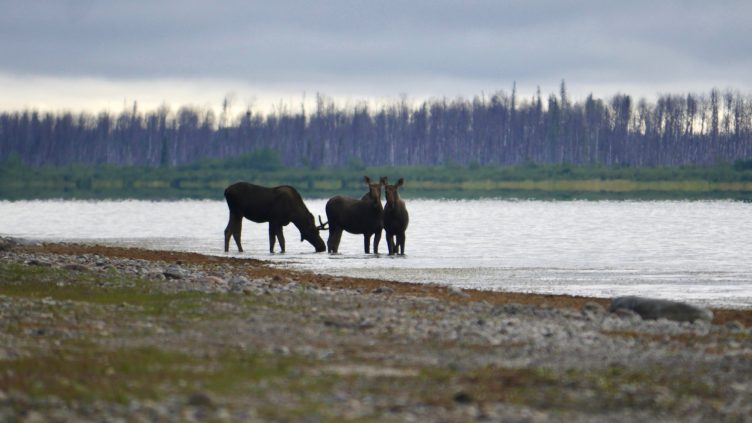 Given the COVID-19 pandemic, Whelan has spent much of her last 20 months on the trail in solitude, steering clear of people and communities.

“When you’re in nature, though, you’re never alone. I’ve enjoyed the company of moose, grizzlies, big-horned sheep, caribou, stunningly beautiful lynx, deer and birds,” she says, adding that she appreciated less the company of ticks, black flies and mosquitoes.

“I have to say I was grateful for mosquito-eating dragonflies. I saw them as miniature Jedi warriors in my world.”

Cities are worlds that we’ve created, she says, but nature is a world that created us. “It makes sense that something ancient and comforting awakens in our DNA when we immerse ourselves in nature.”

Whelan is convinced that every human being stands to benefit from more time outdoors. “I love that the Trans Canada Trail offers Canadians a reason to get outside. It’s a wonderful space that has been created for public use, and it’s free.” 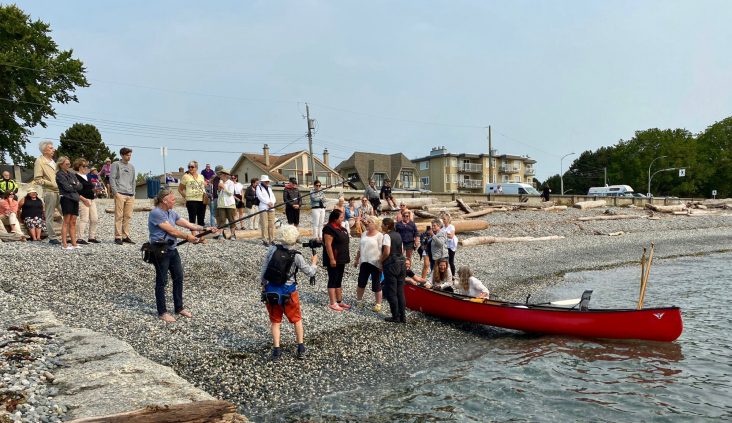 A day later, on August 1, 2021, I’m once again sitting in a power boat with Whelan’s friends off the coast of Victoria.

Whelan has broken camp and we’re following her from a distance as she makes her way to shore. A group gathers, including her parents and a cousin named Shelly Murray who flew across the country from Newfoundland to witness Whelan’s completion of the trail.

“I can still see the back of her head as she rode off on her bike in Newfoundland,” Murray tells me. “I was determined to see her smiling face as she paddled to shore in Victoria. To see her today, well, I’ll remember this moment forever.”

It is something to witness — especially when Whelan remains in her canoe and requests permission to come ashore from Cecilia Dick, Cultural Leader of the Songhees Nation and daughter of the late Hereditary Chief Pally Dick.

Whelan didn’t know if she would be greeted by the young woman, who was accompanied by her sister LaVatta Frank. The sisters’ father had very recently died. Still, with cultural counselling from mediator Mary Holmes (also present on the beach), she is prepared.

She’s been informed that it’s her responsibility to respect traditional Coast Salish protocol and, before disembarking, to state her name, where she’s from, what her intentions are and that she comes in peace.

Permission to come ashore is granted. Whelan steps out of her canoe and is met with a warm embrace. The two sisters then take Whelan’s hands and together they walk to Mile 0 of the Trans Canada Trail.

When they arrive, the sisters sing the “Warrior Song” and, in front of a small audience with Whelan’s hands in theirs, they raise their arms and declare “We are one!”

Her heart, Whelan tells me, just blew up.

“Having these women meet me — in spite of what they’d been through with their dad and in spite of their history as Indigenous people living in Canada — has given me peace and it’s given me hope,” she says.

“We are one. It’s been said that the Earth is our country and I agree. We have to think this way. Future generations depend on it.” 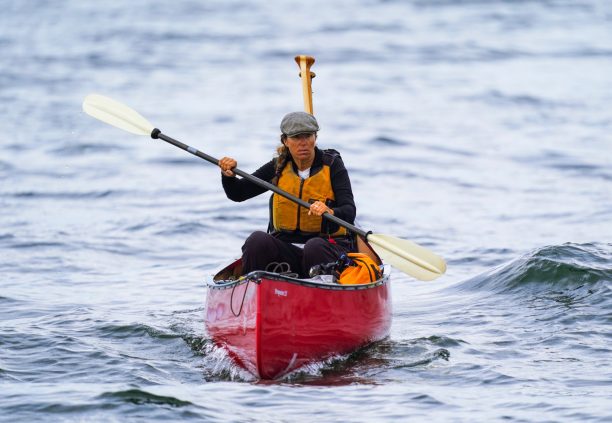 This post is the result of an arm’s-length collaboration with Trans Canada Trail. As always, we’re grateful to our friends in travel who keep us paddling forward. Trans Canada Trail is currently holding a free challenge to all Canadians called The Great Canadian Hike, which runs until October 31.

Follow Dianne Whelan on Instagram @500daysinthewild and check out this moving IG video of Whelan’s historic arrival on the beach in Victoria, B.C.

The Canadian Parks & Wilderness Society is accepting donations in support of Dianne Whelan’s upcoming documentary film 500 Days in the Wild. You can watch the trailer on YouTube.