Welcome to our latest post where, with the Indigenous Tourism Association of British Columbia, we’re featuring young leaders who work in the travel industry. They’re bright. They’re inspired. And their connection to Indigenous tourism is proving meaningful in ways they never imagined.   — Kim Gray

Samantha Rullin (above) is from the Raven Clan in Old Massett, Haida Gwaii. “But I grew up in North Vancouver where I had limited connections to my culture,” says the 25-year-old. “When you’re young, you really just want to be like everyone else. I wasn’t surrounded by a lot of Haida kids.”

She eventually travelled back to Haida Gwaii (“one of the best choices I ever made”), re-connected with her culture and found employment there with Gwaii Haanas National Park Reserve and HaiCo (Haida Enterprise Corporation) which owns, among other businesses, a luxury eco-lodge called Ocean House.

“I didn’t know how many opportunities there were working with Indigenous tourism,” says Rullin, who now has a job as a marketing coordinator for the Vancouver-based Indigenous Tourism Association of British Columbia.

“I work closely with stakeholders and identify how we can help them. I also work with media and travel trade, and I just helped launch our new website. I basically help do whatever needs to be done.”

On a personal note, Rullin has recently taken up Raven’s Tail weaving with guidance from Haida Gwaii-based cultural interpreter Aay Aay Hans. “He’s a huge part of the Haida House visitor experience,” says Rullin, who wove the hat she’s wearing in this story’s lead photo. “Raven’s Tail weaving is complicated, but it’s something I’ve become quite passionate about.”

Meanwhile, with more than 200 unique Indigenous communities in British Columbia, Rullin says she’s on a steep learning curve in her current role.

“Everyone has a story to tell, and only they are truly able to tell their own stories,” she says, adding: “I love what I do. I can’t imagine being able to do it anywhere else in the world.” 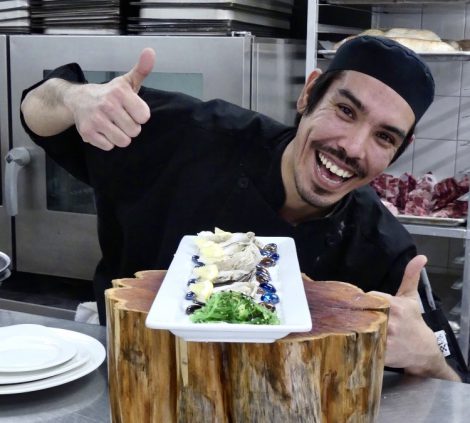 “I’ve always enjoyed being in the kitchen, even from a really young age, whether it was during big family feasts back home or cooking for just a few people,” says the 29-year-old, a certified Red Seal Chef. “I love the fast-paced environment of the culinary industry. I like thinking on my feet, and adapting to situations as they arise.”

Two years ago, when Port Hardy, B.C.’s Kwalilas Hotel opened its doors, the high-energy chef jumped at an opportunity to work for the Indigenous-owned business.

Named for “a place to sleep” in the Gwa’sala-‘Nakwaxda’xw language, the hotel is — thanks in part to Sam — forging a reputation as a delicious “place to eat” as well.

“I’ve made lots of good connections with local growers, foragers and fishermen. I was on a boat last weekend and we picked up the biggest mussels I’ve ever seen. They were huge!” says Sam, who is from Flores Island, B.C.’s Ahousaht First Nation, the largest member of the Nuu-chah-nulth Tribal Council.

The young chef especially loves preparing seafood. “Sockeye salmon is one of my favourites because it can be presented in so many ways: hot smoked, cured, cold smoked. I’m classically trained so I focus on the key flavour feature of what I’m cooking,” says Sam. He also enjoys combining culinary arts with Indigenous ingredients such as berries and foods with medicinal benefits.

These days, the young chef is making an effort to dig into his cultural roots.

“When I was really young, I was adopted by my mom’s sister and taken away from the First Nations aspect of my life for a while,” he says, referencing the damaging of effects of residential schools on his people. “Now, I see that being First Nations is an asset. I’m intrigued and I want to learn more.”

His advice to others considering future careers in the Indigenous tourism sector?

“If you’re prepared to put in blood, sweat and tears, there’s opportunity out there. Figure out what you’re passionate about, and move from there. I get to be creative, use my hands and do what I love. It’s so much more than just a job.”

When Sam — who makes a mean bannock with crème anglaise and berry coulis — is asked what he enjoys most about his job, he says it’s simple.

“When I cook,” says the chef, “it puts smiles on people’s faces.” 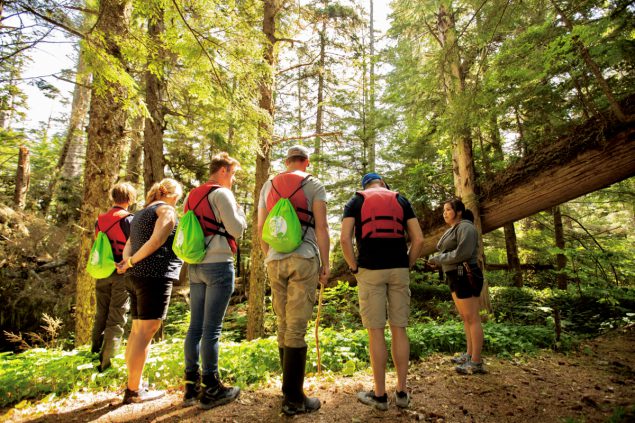 In 2012, a 14-year-old girl took a part-time job with Spirit Bear Lodge — an Indigenous-owned eco-tourism and adventure travel business located in the Kitasoo/Xai’xais community of Klemtu, B.C. This decision would alter the course of her young life.

“It was my first day working as an assistant guide. We had been sitting in the pouring rain all day with a camera crew from Australia and we were apologizing to them. We hadn’t seen the spirit bear they were hoping to see and it was getting late and we needed to return to the lodge,” recalls Sierra Hall-Robinson, now 21 (above.)

“And just as we were about to leave, this spirit bear appears at the mouth of the river. I’ll never forget it. It was like he was walking towards us in slow motion. He let us watch him for about 10 minutes before he disappeared back into the forest. After we returned to the lodge with our guests, I remember thinking ‘I want more of that!'”

Before being employed at the lodge, Hall-Robinson says she didn’t fully appreciate her culture or the land she came from.

“Cultural pride has been a huge benefit of working at the lodge. I struggled with that, growing up, being proud to be First Nations,” she explains, alluding to discrimination Indigenous peoples have historically faced in mainstream Canada.

“Now, I’m proud to be a First Nations woman of Canada. People from Canada and from around the world want to hear our stories, and they want to hear them from us. I want to be part of this. It’s a really strong feeling inside me.”

Hall-Robinson, who is also involved with traditional language revitalization in Klemtu, says she’s encouraging her 15-year-old brother to explore Indigenous tourism as well. “It’s going to be the next booming business in our community,” she says.

As for her future, Hall-Robinson believes her “heart will always be with Spirit Bear Lodge.”

She hopes to eventually play a bigger role in a combination of management and marketing at the wilderness operation. “I have a young son,” she says. “My goal is to remain here in Klemtu and raise him in my culture.” 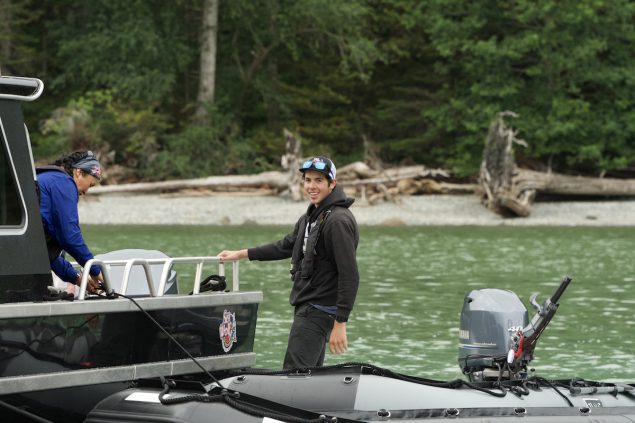 Alfred, who is from the ‘Namgis First Nation, had been working for a whale conservation group near Robson Bight Ecological Reserve (an area famous for its orca population) and found himself sharing stories about his people with kayakers visiting the region.

“My first year with Mike was absolutely incredible,” says the recent high-school graduate. “Working for Sea Wolf really opened my eyes to what First Nations people can do in their territories.”

Alfred says he appreciates being able to share Indigenous history with travellers.

“Back in the day, Canada wanted to oppress us, and put the potlatch ban into effect. Basically, the government didn’t want us to be First Nations people anymore,” he explains. “Well, we’re still here, and we have many small communities in our archipelago.”

The cultural and wilderness guide — who will be taking a four-year Nautical Sciences program at the British Columbia Institute of Technology this fall (“I would love to own my own company one day”) — especially enjoys the fact that wildlife viewing is central to a Sea Wolf Adventures experience.

When Alfred takes guests on tours through his territory alongside co-worker K’odi Nelson and they see a pod of orcas foraging along the shoreline, the guides sometimes turn off the boat engine to observe the animals.

“We stay over 200 metres away from them and K’odi starts to sing in Kwak’wala, a language these whales have been hearing for thousands of years,” he explains. “The orcas disappear from the shoreline and then pop up beside our boat to be with us. It’s a very spiritual experience. I’ve had guests almost in tears when they see this.”

Alfred says his peers are curious about the work he does. “They have summer jobs at the grocery store or at the pool, and then I tell them, in a ‘humble brag’ kind of way, that I’m on the boat watching grizzly bears and whales all day. They all want to come out with me,” he says, adding with a laugh: “Even my mom gets jealous of the work I do.” 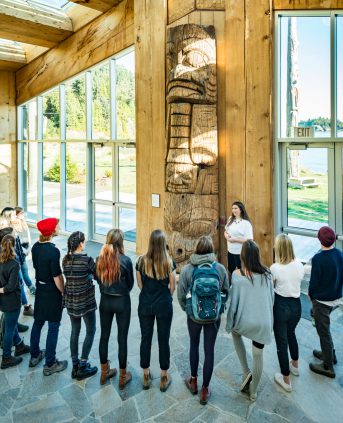 A cultural ambassador with the Haida Heritage Centre at Ḵay Llnagaay, Raven Ryland (above) was born to a Haida mother in Hazelton, B.C. before moving to the remote archipelago as a young child.

“I’ve always appreciated living in Haida Gwaii. I have great memories of harvesting razor clams at North Beach with my mom was I was little,” says Ryland, 23. “I also remember fishing for coho and pink salmon and learning how to cut up a fish with my great-grandfather.”

Ryland’s interest in Indigenous-led tourism began when she worked for the Haida Gwaii Watchmen program. Funded by Parks Canada, the program gives Haida people between the ages of 16 and 78 opportunities to share first-hand knowledge about their culture with visitors to Gwaii Haanas National Park Reserve.

But it was when Ryland enrolled in an Aboriginal Ecotourism Internship Program — a Vancouver Island University, Heiltsuk Tribal Council and North Island College initiative — that she knew where she wanted her career to go.

She and other interns travelled throughout B.C. where they met a variety of Indigenous entrepreneurs working in the tourism sector.

“I was impressed,” says Ryland. Essentially, she explains, Indigenous tourism is about sharing culture, and people in her territory have been sharing their culture with visitors to Haida Gwaii “since time immemorial.”

Part of her job at the Haida Heritage Centre, which has a mandate to celebrate living Haida culture, is to help visitors get past stereotypes of Indigenous people. “We’re all different,” she says. “We don’t all live in tipis.”

Ryland is especially interested in sustainability, which the Haida have historically embraced.

“Tourism permits us to step away from (industrial-style) logging and fishing. We’ve been sustaining ourselves for thousands of years on this land and this water. Our youth are trying to return to this,” she explains.

Editor’s note: For related stories, be sure to check out our extensive coverage of Indigenous tourism in Canada on our Arts & Culture page.

An explorer finds his heartbeat in a place outside of time