On the eve of my visit this past summer to the Adäka Cultural Festival in Whitehorse, Yukon, friends and family wanted to know where I was going and why.

I confess I loved answering this question. “Well, you see there’s this festival up north celebrating Indigenous arts and culture,” I’d say, before continuing. “And people are coming from all over the planet’s circumpolar regions to join in. How cool is that?”

My answer invariably solicited more questions about the festival which — in its eighth year and aside from offering 45 art and traditional craft workshops to participants — would be showcasing an ambitious 230 performing and visual artists and 35 knowledge keepers, presenters and filmmakers.

“People can come to this festival and build real relationships with Indigenous people who are just doing their thing, expressing their culture. It’s also a chance for us to share, and to share on our own terms,” says Marilyn Jensen, of the local dance troupe Dakhká Khwaán Dancers (who performed at the event) and whose late mother Doris Mclean was a longtime festival supporter.

Now, having experienced the Adäka Cultural Festival first-hand (which takes place at the Kwanlin Dün Cultural Centre) — along with Canadian photographer Suzanne Ahearne, whose wonderful photos and accompanying words capture festival moments below — I can vouch for what proved to be a dynamic and heart-warming experience.

Would I return if the opportunity presented itself again? In a heart beat. 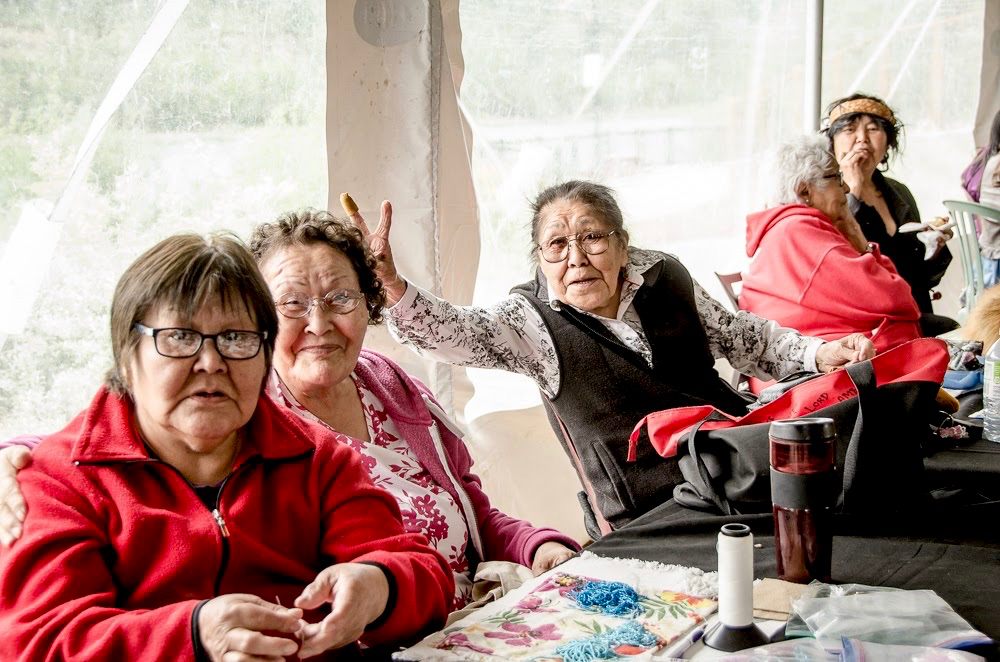 Beading, sewing, carving and painting contributes to the social, economic and cultural fabric of the many communities of people who gathered at Adäka. The dozens of craftspeople working and teaching in the big tent also contributed to a lot of boisterousness and laughing. I took a beading workshop from Elizabeth Kyikavichik (above left), a beader who lives in Old Crow, Yukon.

Ten of us spent a half-day around a table talking, laughing and making beaded keychains, learning several different techniques in the process. Elizabeth told us that the tradition is to give away the first thing you make when you learn a new skill. I was ridiculously pleased with my crude “first” and I gave it to my mom when I got home. Between workshops, Elizabeth spoke in Gwitchin with her cousin Sarah Teya (middle) and English with friends from remote places around the North. Adäka, according to these women, is an opportunity to catch up on “gossip” and share stories about old times. 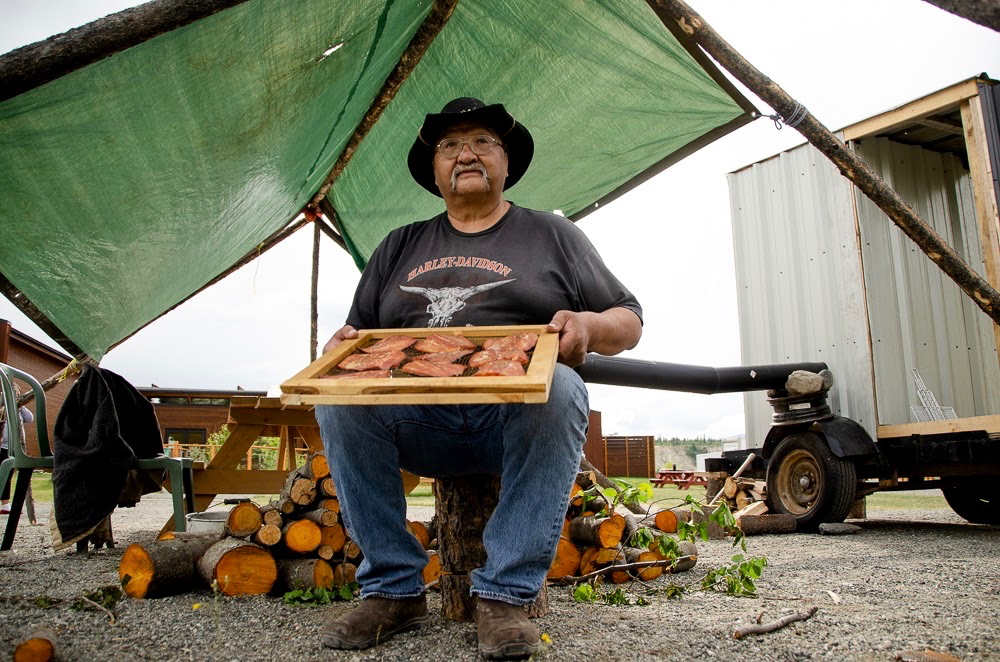 Ed Smarch brought his hut smoker to the festival site from Teslin, and set it up by the nearby Yukon River. Every morning, he stoked it up with red alder and each afternoon, he and his daughter Roshanna sold salmon steaks to festival-goers. “I was born into fishing,” Ed said. “We are part of the land and part of the water and that’s where we get our food.”

However, this salmon specifically came from the Superstore in Whitehorse. “We’re not allowed to fish right now because of the low fish count,” he explained. Still, even if he has to buy salmon from the grocery store, he says he’s going to keep his smoking tradition alive: “It makes me happy when I see other people eating it.” 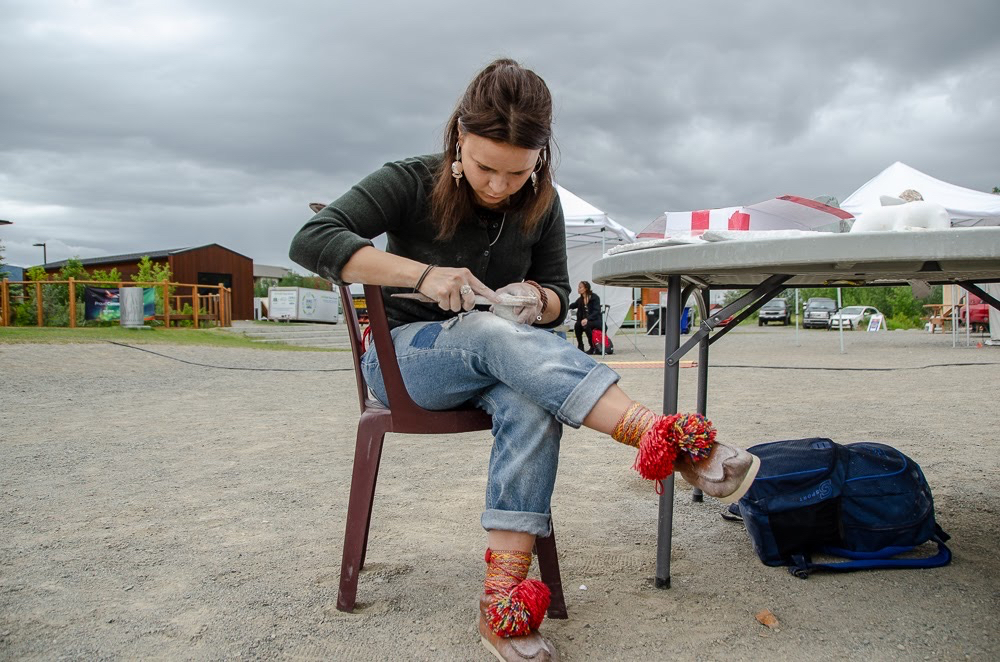 A unique festival element is the overall mix of stage and outdoor performances, open-air artist studios, a top-drawer gallery and gift shop, and workshops for attendees. I spoke with French and German tourists, but also with several people from Whitehorse who were taking a holiday in their hometown and enjoying a week’s worth of day-long workshops in painting, carving, metalwork and weaving, all taught by Indigenous artists.

A wonderful kind of cross-pollination was also taking place between artists. Shown above, you see Inga Wiktoria Påve who is Sami (Indigenous people from northern Scandinavia and parts of Russia) and who comes from a family of reindeer herders in Sweden. She’s an artist who works mostly with textiles, leather and paint. Here, she’s taking a soapstone carving course with renowned Cape Dorset sculptor, Koomuatuk “Kuzy” Curley — who currently lives and works in Ottawa. 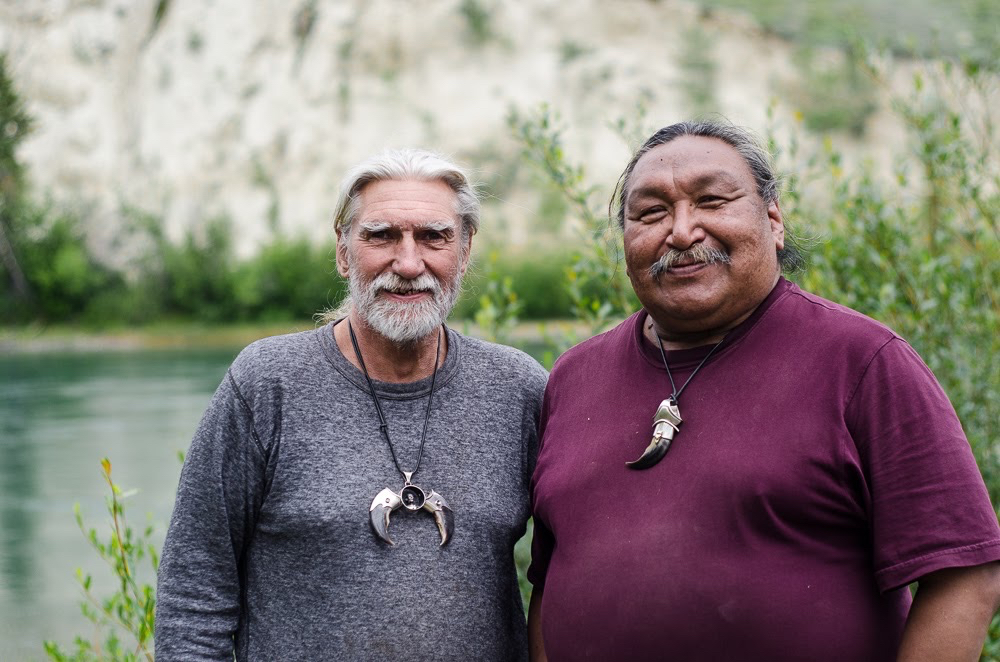 Old friends George Roberts and Mathew Nuqingaq shared a table in one of the open-air artists’ tents. Mathew, a master jeweller, silversmith and drummer/dancer from Iqaluit in Nunavut, sculpted the silver pendant for his friend (a more elaborate version of his own) from polar bear claws to honour George’s hunting skills.

George is a master knife maker based in Whitehorse who turns hunting, fishing and cooking knives into art, carving ornate handles made of wood, bone, antler, stone and even fossilized mastodon. During the festival, they were collaborating on a sword made of steel, silver, narwhal tusk and muskox horn, another example of the kind of intercultural collaboration that thrives here. 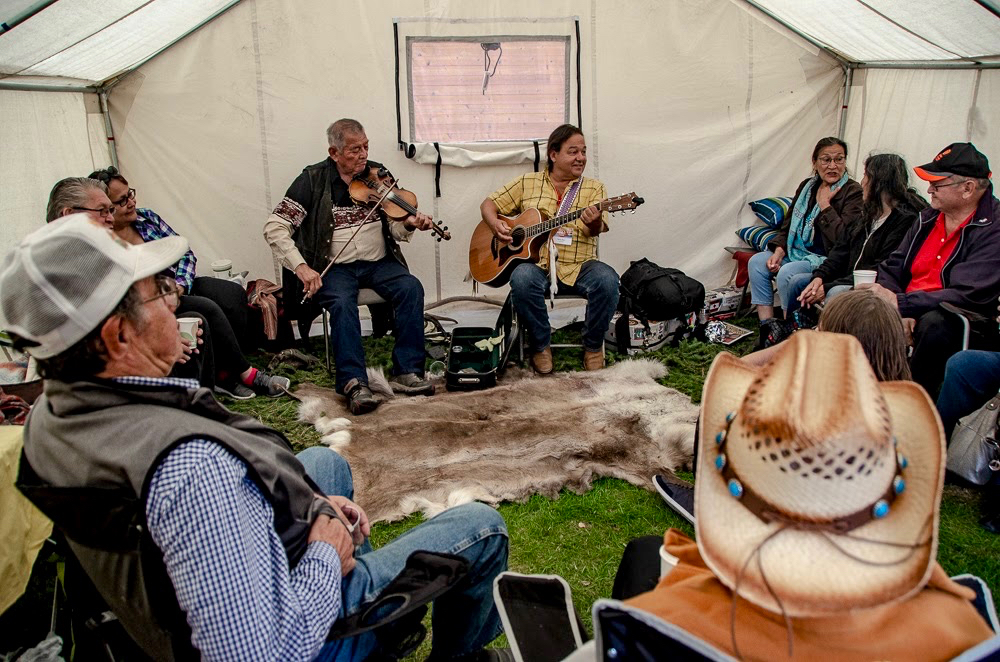 Most days, the white canvas flap on the elders’ tent was steadily zipped and unzipped as a stream of people came and went. Once, as I was passing by, a hand reached out and beckoned me to come on in. Pleased to find refuge from a sudden rainfall, I followed a man carrying a tray of smoked salmon and a woman hefting a huge pot of tea.

Inside was a wonderland of comfy lawn chairs, a wood stove and a circle of people singing along with Tahltan fiddler Gerald Edzerza (left) and folk guitarist Kevin Barr, their feet resting on green grass, fragrant spruce boughs and caribou fur. Seats were at a premium, so I only stayed for as long as my tea stayed hot. 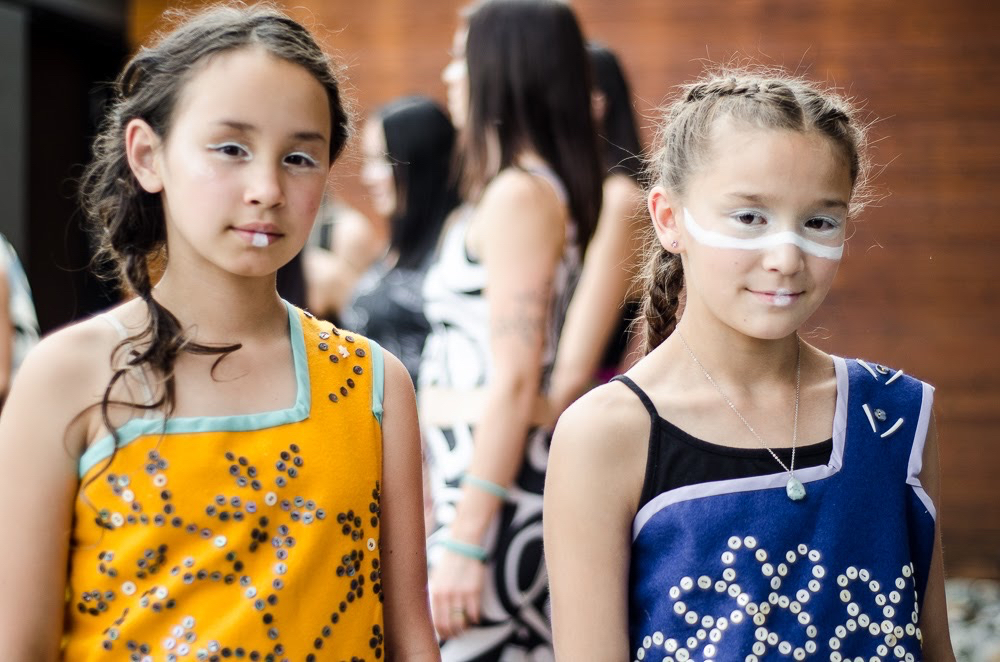 Dà Ze Tsàn Fashion Show (“From our hearts” in Southern Tutchone) was one of the highlights and the culminating event of the five-day festival. The show featured 110 outfits by 32 Indigenous designers including the internationally renowned Sho Sho Esquiro, and many had shown their work at the inaugural Indigenous Fashion Week Toronto in June.

I spent much of the day behind-the-scenes, steering clear of rolling clothes racks and the spritzing of hairspray but close enough to touch and smell as much as I could of the moose hides, sealskins and furs being used both in contemporary designs and traditional regalia.

Of the 44 models, Elizabeth Hope (above left) from Juneau, Alaska, and Justine Bellmore Smarch from nearby Carmacks were the two youngest. Seeing these girls in dresses by Tlingit designer Lily Hope (Elizabeth’s mother) gave new meaning to the word Adäka (which means “coming into the light”) because of their youth and because they, over the course of the fashion show, modelled traditional culture and modern couture so comfortably and with such strength. 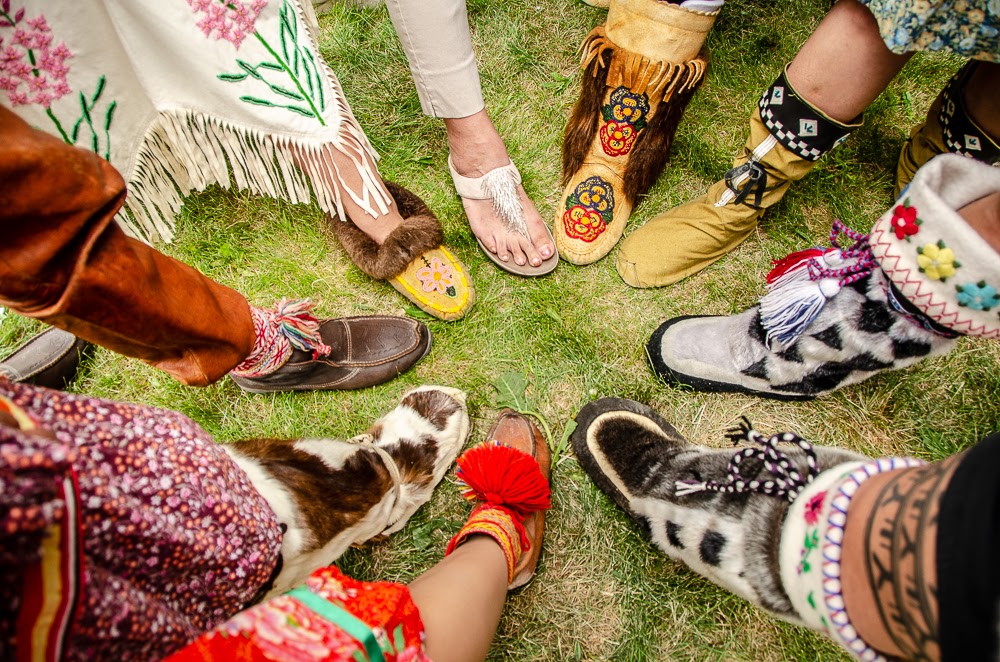 At first, I felt like an outsider, attending Adäka as a non-Indigenous visitor to the traditional territories of the Southern Tutchone people. I was reticent about asking artists to dive one more time into often difficult backstories to provide me with a window on the experiences that informed a beautiful or challenging piece of art or music.

For Indigenous people in Canada and around the world, just picking up the tools of their ancestors to carve, bead, or weave — or to drum, dance and speak their own languages — can be an act of resilience. So during the first few days, I floated around as an observer, witnessing collaborations and connections taking place organically everywhere — around crackling fires, at busy beading tables and sometimes just when people were hanging out and eating burgers on the grass.

I overheard shamanic throat singer and dancer Olga Letykai from the Chukchi peninsula in Siberia comparing throat singing techniques with young singer Aasiva from Iqaluit. Hovak Johnston, author of Reawakening our Ancestors’ Lines, brought her Inuit Tattoo Revitalization Project to the festival, and I saw a number of women glowing with freshly inked patterns wrapping around fingers, biceps and thighs, a practice once banned. Men of all ages gathered under the cottonwoods on the bank of the Yukon River and played skin drums and shared songs and stories for hours at a time. I found it very moving to watch.

Chantal Rondeau, of First Nations and Acadian descent, was the producer of the Circumpolar North fashion show. She says that the words of Métis leader Louis Riel are the guiding principle that inspires all her media work: “My people will sleep for 100 years, but when they awake, it will be the artists who give them their spirit back.” The longer I was at the festival, the more I saw evidence of this spirit coming alive.

As the week progressed, I allowed myself to join in on many of the levels of joy, energy and generous multicultural sharing that percolated at the event. When I flew back home with a corner of my carry-on bag full of beautiful arts and crafts purchased from the gallery, I also brought with me a greater sense of commitment to being a better ally to Indigenous peoples transforming Canada and the world.

What richer reward could a festival offer?

Note to reader: This post was produced in an arms-length collaboration with Yukon First Nations Culture and Tourism Association. Our story was not reviewed or edited by our partners in tourism before publication.

*Many thanks to Air North and Yukon Inn for helping support our trip north, and a warm shout out to our friends at Kanoe People for getting us, and our new Sami friend and knife carver Fredrik Prost, on the Yukon River during our last night in Whitehorse. We loved seeing the beavers slapping their tails on the water. Our only regret was that we didn’t have more time!

Next year’s Adäka Cultural Festival takes place from June 28 to July 4. The tentative theme? “From the Land,” celebrating art produced from the earth and in concert with the seasons.