When was the last time you took a walk through a forest.

They say people feel most alive when confronted with beauty and for wilderness junkies like us, beauty — the kind that inspires awe, floods you with well-being and makes you grateful to be alive — often presents itself in natural places.

Given our affection for the great outdoors, we recently jumped at an opportunity to partner with our country’s leading charitable land trust on a walkabout involving three of its urban wilderness sanctuaries.

Who knew that these Nature Conservancy of Canada (NCC) protected areas — located near Edmonton, Montreal and Halifax — even existed, and that the public is welcome to respectfully visit? Not us, at least not until now.

“Many of Canada’s major cities are located in areas of high biodiversity. Every city, within or around it, has species and habitats that are important locally, nationally and even globally from a conservation perspective,” says NCC’s senior conservation biologist Dan Kraus.

“Forests, wetlands and grasslands purify water, clean air and provide green infrastructure,” he says. “Being in nature is proving not only to be helpful to, but essential to, human health. It’s good for our minds and our bodies and it simply makes us better people.” 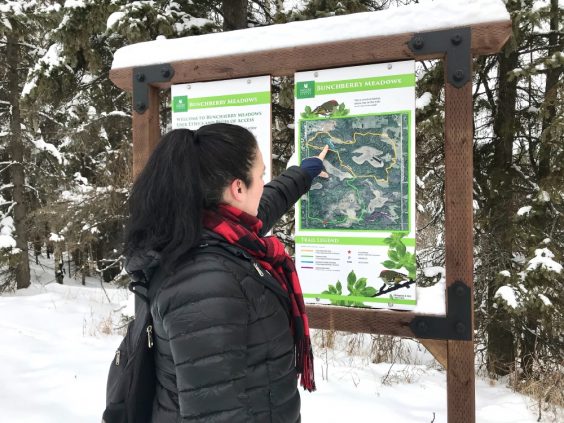 As soon as I hit the trails during my visit to Bunchberry Meadows — a 640-acre slice of unsung wilderness located a mere 30 minutes from downtown Edmonton, AB — I’m overwhelmed by noteworthy nature moments.

Perfect, heart-shaped moose tracks cross the snowy trail in front of me.

A woman on nordic skis glides past, then stops to explain how a massive owl once startled her here when it swooped over her head from behind and soared off into the forest.

Beautiful bouquets of white birch trees fit for a fairy tale make me catch my breath.

“We’ve got buckets of moose, too, and we even get the occasional black bear,” she says. “I always encourage people to leave their cell phones in their cars when they visit — to take time to see, smell and hear the trees.” 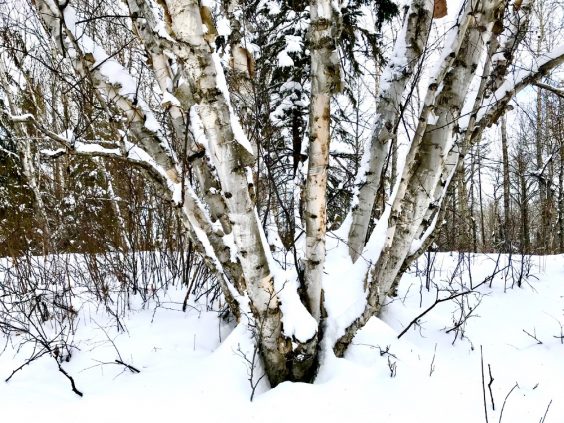 She’s thankful for the five families who owned and stewarded Bunchberry Meadows until 2016 before selling it to the Nature Conservancy of Canada and the Edmonton & Area Land Trust, who will co-manage the property in perpetuity.

“When they agreed to do so, I felt like we had just saved a dear friend from a death sentence,” says Bell. “Developing it would have been such a great loss. When a piece of land has had little human interference, there is a sacredness to it.”

Bell speaks fondly of a tree on the property that she likes to visit. “A huge old birch tree I call Grandmother Birch,” she says. “I’ve spent many hours over the years sitting with my back against her comforting trunk and contemplating life.”

She also recalls unforgettable encounters with wildlife on the property: “One winter evening at dusk when I was out skiing on my own, a huge bull moose suddenly came out of the willows and stopped on the path. We both stared at each other for a few seconds before he charged off. It was quite a moment.” 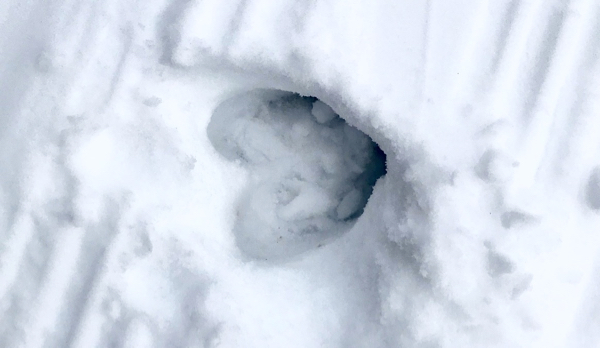 Katelyn Ceh, an NCC biologist based in Alberta, says she also feels “tremendous relief” that Bunchberry Meadows will remain intact into the future.

“Edmonton grows closer and closer. There’s always potential for these natural spaces to be developed and to disappear forever. Now, that’s not going to happen,” says Ceh.

“One of the challenges we have is letting people know that we’re an option for landowners. If they’re sitting on ecologically valuable land, there’s an opportunity for people to leave a legacy to their families, to Canadians and to biodiversity. People need to know that.”

Just before I wrap up my Bunchberry Meadows tour with Romito, we run into another cross country skier.

“I have a farm next door and I didn’t even know this place existed. I just heard about it,” she says, excited about her new discovery. “How can I help? I’d like to be part of this.”

Romito explains to her that everything she needs to know about the conservancy can be sourced online, and then we bid her goodbye.

As she heads off towards the forest, she shouts over her shoulder: “Wish me luck. I hope I don’t get lost!” 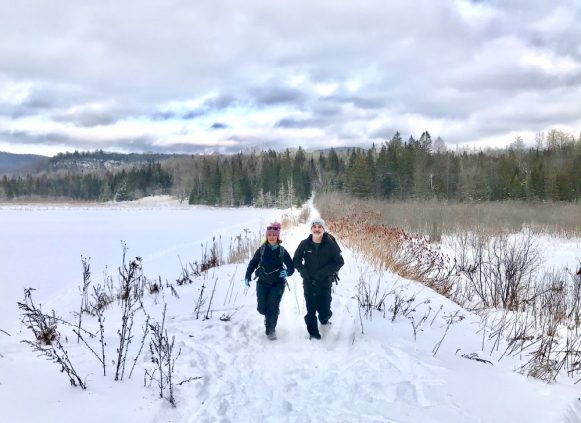 “Just wait until you see porcupine alley,” says an enthusiastic Patrick Perreault, who volunteers with a local citizen group that supports the Alfred-Kelly Nature Reserve. “It’s a very special place.”

I’m hiking, winter chains on my boots, along a snowy 16-km trail with Perreault and an NCC project manager named Annie Ferland. The land we’re exploring was acquired from private interests in 2010 with the help of multiple partners, including the Nature Conservancy of Canada and Bird Protection Quebec.

We see and hear signs of life everywhere in this pristine 1,236-acre nature sanctuary, located just one hour north of Montreal, QC near the small towns of Piedmont and Prévost.

The soothing gurgle of raven song echoes through this relatively untouched pocket of Laurentian forest. A fit, happy jogger runs lightly past and we come across a pair of hikers who’ve stopped to warm themselves with hot chocolate by a small bridge. 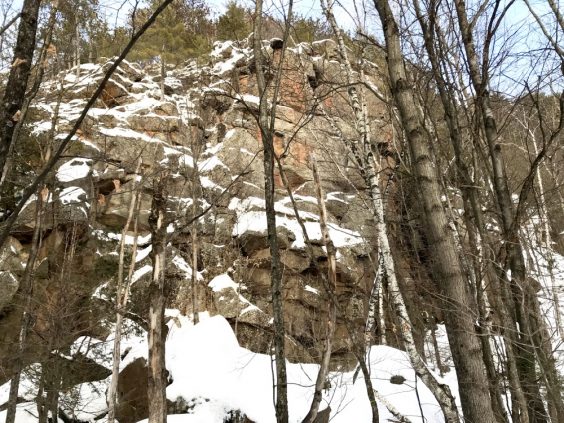 Ferland points to nearby cliffs that flank the reserve, and in the distance we spot a handful of ice climbers ascending frozen turquoise walls.

Every March 1st, climbing stops to make way for vulnerable falcons that nest here. So far, this arrangement has been successful. Eighty per cent of all birds of prey recorded in Quebec, I’m told, have been observed in this protected area.

Local biologist Claude Bourque says that aside from porcupine and among many other species, mink, beaver, river otter, moose, northern leopard frogs and black bear also call the reserve home.

“Alfred-Kelly helps create a wildlife corridor north of Montreal,” he explains. “And it helps us participate somewhat in the fight against climate change.”

Meanwhile, Nathalie Rochon, the mayor of nearby Piedmont, is another champion of the Alfred-Kelly Nature Reserve. She often comes here with her family and she insists the wilderness sanctuary would have never have been protected without the land trust leading the charge.

“It is a jewel and we hope to acquire even more land surrounding it to protect it further,” says Rochon, who confesses she entered politics expressly to lobby for more wilderness protection in her region.

As we continue our winter hike through Alfred-Kelly Nature Reserve, Perrault suddenly exclaims “Here it is! Porcupine alley!” and he points to a long, narrow track leading towards a handful of trees that look like they’ve been tangling with a paper shredder. 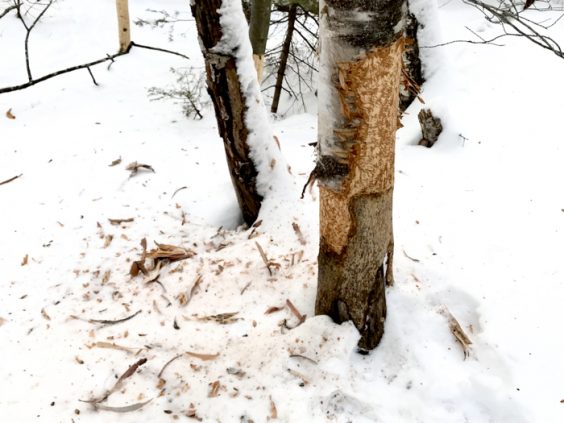 Tree bark litters the snow and the scene suggests that a raucous party of porcupines had just been here before disappearing into the forest.

I find myself smiling. A day in the woods always gives back in unexpected ways. 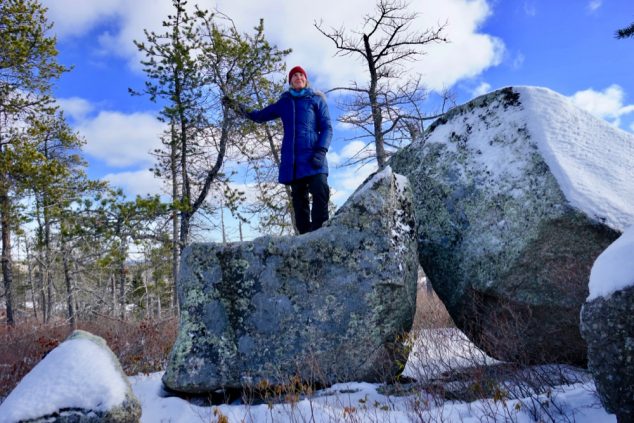 As we stand before an impressive glacial erratic, I consider asking my guide to climb up for a photo. “Sure, why not?” she replies, anticipating the request and then effortlessly scaling the face of this remnant from the last ice age.

As I trail behind her along snow-covered paths that sparkle like diamonds on this blue bird Halifax day, Morse gives me the scoop on the 379-acre nature sanctuary.

We can see the city skyline from where we are and if we keep going, I’m told we could hike a full loop that would take about three hours.

The Shaw Wilderness Park — home to 40 species of birds and, among other animals, fox, mink and white tailed deer — boasts unique (for the region) stands of jack pine, the tree made famous by Group of Seven painter Tom Thomson and one of the few pines hardy enough to withstand harsh East Coast weather. 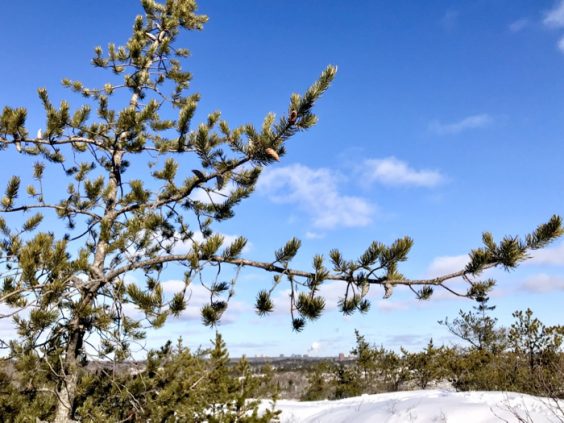 Craig Smith, NCC’s Nova Scotia program director, tells me that protecting ecologically sensitive areas like the Shaw Wilderness Park is priceless today given that our planet is “in a mass extinction crisis. We are simplifying landscapes and losing habitat for species at a global scale.”

Because seventy per cent of Nova Scotia’s land is privately owned, moreso than in other provinces, conserving biodiversity here often involves private landowners.

Take the area where the Shaw Wilderness Park is located. It was slated for “prime development” by The Shaw Group Limited until community activists, the Nature Conservancy of Canada and then the Halifax Regional Municipality took a special interest in it. 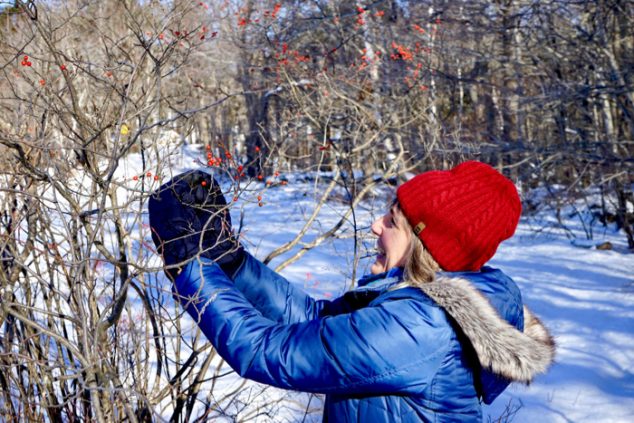 When I reach out to Halifax-born businessman Allan Shaw of The Shaw Group Limited, he recalls “roaming this land” as a child.

“My wife did too, though we didn’t know that about each other,” he says thoughtfully.

“When the Nature Conservancy of Canada approached me, and you would not believe how well prepared they were, I took note. They talked about the uniqueness of creatures that live here, about bird life and trees and about why preserving land is important.”

Shaw says creating the Shaw Wilderness Park was a chance for a company to “put aside self-interest and participate in something bigger,” creating a legacy for everyone. “I hope other developers,” he adds, “will be inspired by what we’ve done.”

As NCC’s senior conservation biologist Dan Kraus says, buildings will crumble over time but these nature sanctuaries will become the heart and soul of communities.

“I highly doubt that in 200 years people in Halifax are going to look back and say, ‘Too bad. I really wish they had put condos on that land.'”

If there’s anything I’ve learned from this cross country urban wilderness project, and I’m pretty sure it’s not just all that fresh air and exercise talking, it’s to remain hopeful.

How could I be otherwise after meeting such a smart and passionate collection of conservationists from the grassroots to the highest levels — exceptional people making a world of difference in their own backyards.

This sponsored post was powered by the Nature Conservancy of Canada.