Editor’s note: This story is the result of an independently produced collaboration with the Indigenous Tourism Association of Canada.

I’ve never formally introduced myself to a canoe before. Or, for that matter, to the spirit within a canoe. But that’s what I solemnly do in a small group that includes members of the Tsleil-Waututh First Nation near Vancouver, B.C.

“We always asked a lot of the cedar trees that were so important to our survival,” says Dennis Thomas (whose traditional name is Whonoak) of Takaya Tours. “So we honoured and we respected them, and we believed their spirits lived on in the canoe.”

Today, Thomas and his colleagues continue to share traditional canoe protocol with their guests: songs asking the waters to guide us and mesmerizing chants that linger in my head as 16 of us board a 40-foot long ocean-going canoe, an exact fibreglass replica of a Coast Salish cedar dugout.

Over and over, I dip my paddle in time to hypnotic drumming that resonates through my chest like heartbeats, a steady rhythm that sets our pace as we power across calm waters up a wild, steep-walled fjord.

When we pause, raising our paddles skyward to silently drift alongside the rainforest shoreline, Thomas, our drummer and guide, motions towards 500-to- 800-year-old pictographs of mythical sea serpents and thunderbirds painted on the rocky walls beside us.

His stories conjure bustling seaside villages as he escorts us through territory where his ancestors thrived as long as 4,500 years ago.

After two intense and moving hours of exploring the Tsleil-Waututh’s ancestral lands, we round a bend and I’m jolted back into the present by Vancouver’s glittering skyline just across Burrard Inlet from the city’s North Shore.

A longtime paddling enthusiast, I know well how transformational the act of canoeing can be: the simplicity of venturing into the wilderness with such a minimalist craft, working closely with water’s varied motions, letting go of the material world and being awed by the moment.

As a professional travel journalist, I’ve learned over the years how humble Indigenous people can be in the face of nature — how respectful and connected to all of life. It strikes me as an obvious and enlightened philosophy and, given my own love of canoes, it’s what leads me to venture out and experience canoeing through an Indigenous lens.

“Anyone can take anyone on a canoe trip,” outfitter Greg Hopf, co-owner of Moccasin Trails in B.C.’s South Thompson region, once told me. “But stepping into a canoe with an Indigenous guide offers an immersion into history, an introduction to our sense of place and insight into how canoes are integral to our culture.” 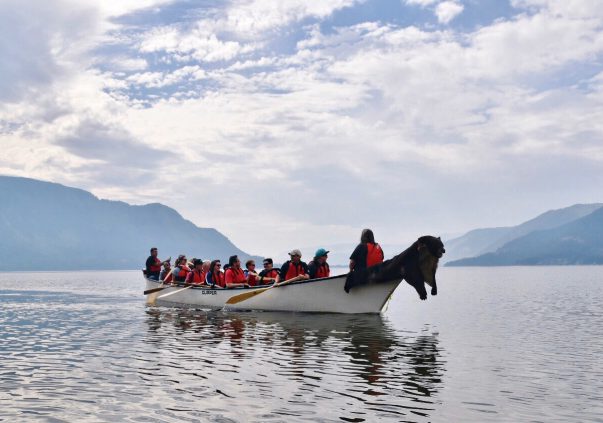 Although the canoe has been embraced as a “Canadian” icon in popular culture, similar vessels are common worldwide. In fact, the English word originates from the Caribbean Arawak people’s dugouts, which they called canaoua.

Meanwhile, First Nations peoples across North America have their own names for watercraft that allowed them to navigate the continent’s web of rivers, lakes and oceans for millennia before the arrival of Europeans.

Depending on the vessel (and how it was used), the Squamish Nation sometimes called them snexwílh. To the Mi’kmaq, they were kwitn. The Cree cîmân sounds similar to the Métis jiimaan.

I’ll never forget seeing a giant moss-covered red cedar dugout in the rainforest of Haida Gwaii, an archipelago located off the northwest coast of Canada (often referred to as our country’s Galapagos.)

Carved from trees that were up to 1,000 years old, the impressive Haida tluu reached 55 feet, weighed tonnes and was believed to have travelled as far as Hawaii. Today, traditional methods of dug-out canoe building are being revived at the Haida Heritage Centre at Ḵay Llnagaay carving shed in Haida Gwaii’s Skidegate.

Throughout the land we know as Canada, where trees were smaller and portages longer, lightweight boats were often fashioned from durable birch bark.

They were also crafted, depending on the region, from moose hides stretched over wooden frames.

And in the West, the unique “sturgeon-nosed” canoe made from white pine bark on a cedar frame (called yaqsuʔmiǂ  by the Ktunaxa) had a reversed prow with the bow and stern pointing downwards to make for easier paddling through the region’s bulrush-filled wetlands. 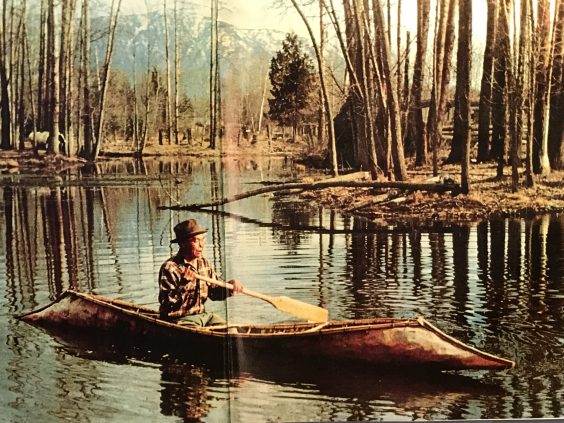 My research into this world (so much to learn and I’ve barely scratched the surface!) suggests that the age-old relationship with canoes is beginning to thrive once more throughout Canada as many Indigenous people who lost touch with their ancestors’ culture are re-connecting with the tradition.

Worth noting for paddling enthusiasts everywhere is that beyond this grassroots phenomenon, more and more opportunities are becoming available where people can experience unique, even life-changing, canoe adventures led by Indigenous outfitters.

A sampling of my current wish list? To start with, I dream of slipping into a 29-foot voyageur canoe in the Northwest Territories for a night-time paddle up the Yellowknife River amid spectacular Northern Lights with Narwal Northern Adventures.

Michela Carrière piques my interest, too. She’s a young Cree/Métis woman who invites guests to join her family off the grid at Big Eddy Lodge in the Saskatchewan River Delta.

“The 35-kilometre canoe trip in (to our lodge) is the first step to letting go and becoming more mindful of the moment,” says Carrière, who also connects visitors from around the world to nature with her company Aski Holistic Adventures, blending Indigenous practices like plant medicine with massage, yoga and meditation.

And I’m excited to connect with Michelle Savoie of the Voyageur Wilderness Programme, which has been steadily leading Métis canoeing adventures northwest of Thunder Bay, Ontario since 1960. Who knew?

Of course, the irony of current eco-calls to “leave no trace,” “respect nature” and “be sustainable” hasn’t escaped Savoie: “(Being eco-friendly) isn’t new to us, it’s part of who we are. Modern society is rebranding traditional knowledge. We’ve almost come full circle!” 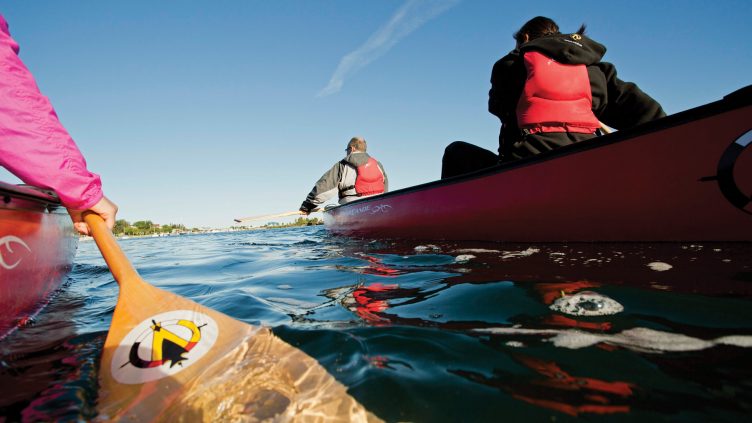 I love that Indigenous outfitters incorporate spirituality to enhance the wilderness canoeing experience.

“We do a smudge — a spiritual wash with the smoke of sweet grass, tobacco, sage and cedar — to honour the canoe spirit before every trip,” says Northeastern Ontario’s Great Spirit Circle Trail guide Steve Antoine. He retraces the Anishnawbek people’s ancient canoe routes at sunrise, sunset and during full moons.

“We paddle into the wide-open water where there is no choice but to stop and watch the changing colours and reflections,” says Antoine. “It slows people down. It changes them.”

And it’s not just canoe tripping that holds so much power. The watercraft themselves seem to be able to bridge cultures and knit together communities.

In 2017, for example, visitors from all backgrounds observed with great interest as B.C.’s Little Shuswap Indian Band carved its first new black cottonwood dugout, or ts’eq7éwll, in 60 years, which is now on display at the band’s Quaaout Lodge & Spa at Talking Rock Golf Resort.

“I’ve got doctors, lawyers — people from around the world — who gladly pay to get on their hands and knees to dig up roots with me,” says Labrador, whose 21-foot ocean-going kwitn (which he built during the summer of 2019 with the help of his daughter Melissa and his two grandchildren) required 1,200 feet of spruce roots for “sewing” parts together.

“At the end of the day there is a sense of peace about (those who join me). They’ve done something with their hands and reconnected with the earth,” he continues. “They’ve literally become grounded.” 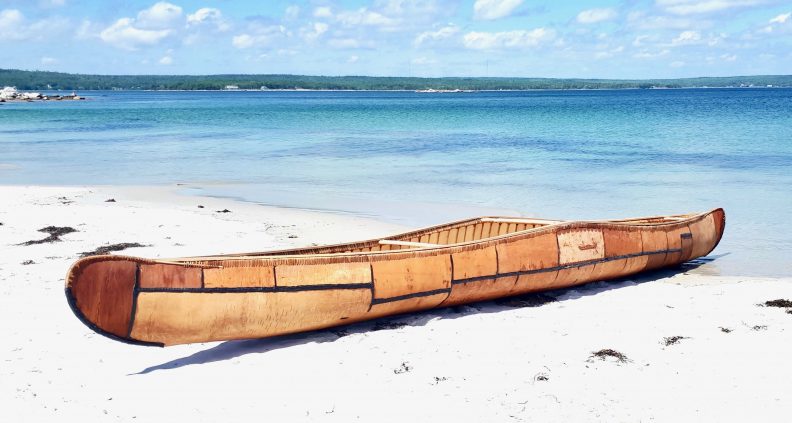 An Algonquin Nation master wiigwaas chiimaan builder from Western Quebec, Chuck Commanda insists that “a canoe is a tool of reconciliation between the past and the present.”

Commanda constructed a birch bark canoe outside St. Catharines’ Performing Arts Centre in Southern Ontario in time for last year’s annual gathering Celebration of Nations — an “Indigenous arts gathering that celebrates creativity, diversity and resilience.” It marked the town’s first new canoe in over a century.

When Commanda sources ideal trees for his canoes, the Algonquin canoe builder follows tradition. At the foot of the tree, he performs a ceremony smudging tobacco with his left hand — the one closest to his heart — while praying, asking the tree’s spirit to live on in the canoe and offering thanks.

Most Indigenous canoe ceremonies across the country are unique, but good intent is at the heart of them all, says Robin Cavanagh, Director of Indigenous Peoples’ Collaborative Relations at the Canadian Canoe Museum in Peterborough, Ont.

“They all aim to be kind, humble, do things honestly, seek permission, show respect and honour not only the tree, but their history, land, teachings and ancestors,” says Cavanagh.

Since roughly one-third of the museum’s collection of more than 600 watercraft are of Indigenous provenance, Cavanagh, a member of the Sagamok First Nation, joined the museum in 2018 to enhance and build relationships with Indigenous communities across Canada.

“In most cases they spread the cleansing smoke from sage and other medicines around the canoe with an eagle feather,” he says.

Offerings are made, there are songs and drumming and then a feast is held for the spirits with the first plate set alongside the canoe. These ceremonies are often open to public. 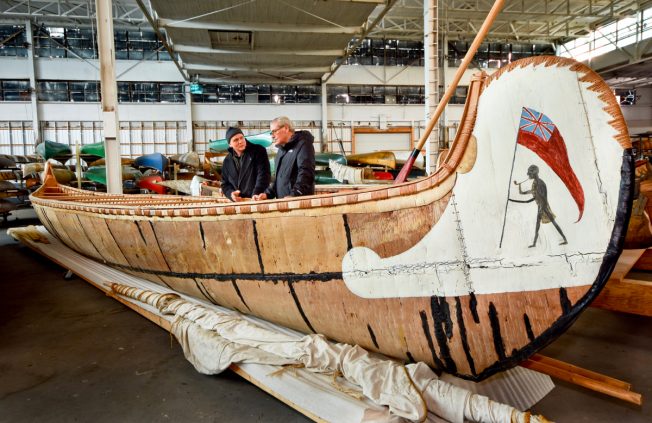 At the end of my Takaya Tours paddling trip in North Vancouver, I learn about a remarkable — perhaps the ultimate — Indigenous canoe ceremony while enjoying a feast of barbecued salmon, wild rice and bannock.

Dennis Thomas explains that every year, a different First Nation territory invites all Indigenous people from the Pacific Northwest (from Oregon to Alaska) to embark on a traditional canoe voyage along ancestral waterways that culminates in a huge celebration.

This July, the Snuneymuxw First Nation in Nanaimo, B.C. will be the next host of the annual Tribal Canoe Journeys, welcoming canoe families after as much as a month of paddling and camping en route to the event.

“It’s spectacular, and moving, to see over 100 canoes lined up in the water, each carrying out formal permission and welcoming protocol until everyone is ashore for a fun week of cultural celebrations and feasting,” says Thomas.

He credits cultural leader Frank Brown (of the Heiltsuk First Nation) for being the inspiration behind this extraordinary gathering after Brown announced to his people in the late 1980s that “we need to get back on the water.”

What’s really exciting, says Thomas, is that Tribal Canoe Journeys is inspiring Indigenous youth who participate to connect in earnest with their ancestors’ culture.

“This celebration touches the spirit of everyone involved,” he continues.

“In our own small way at Tayaka Tours, we also hope to touch peoples’ spirits as we share stories about our past and about how we’re moving forward in a modern world.”